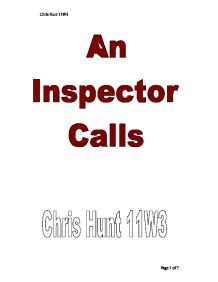 How Would a Modern Day Audience Respond To a Performance of &amp;#145;an Inspector Calls?

HOW WOULD A MODERN DAY AUDIENCE RESPOND TO A PERFORMANCE OF 'AN INSPECTOR CALLS?' An Inspector Calls is set in 1912, the play is set in the dining room of a Mr Birling's household in the city of Brumley, an Industrial City in the north of the Midlands. From the opening scene of Act One, J.B. Priestley wants the audience to think that the Birlings are just an average middle class family of the time. In fact, they have a hidden past that will be revealed during the course of the play. The Play starts off with the Birlings making a toast to the marriage of Mr and Mrs Birling's daughter, to a son of a wealthy (upper class) businessman. We learn by this scene about the personalities of the characters these include Arthur Birling who is a slightly pompous, proud man that does seem to care for his family but deep down he really cares more for the business gains of the marriage more than that his only daughter is the one getting married. Sybil Birling is the wife of Mr Birling and always seems to be complaining e.g. Sheila! And Eric! And Now Arthur! Nevertheless, she does have a nice side to her "Yes, Gerald. ...read more.

The people originally watching this play would have just been through World War 2 and so they would find the final warning to the Birlings very prophetic "But just remember this. One Eva Smith has gone - but there are millions and millions and millions of Eva Smiths and John Smiths still left with us, with their lives, their hopes and fears, their suffering and their chance of happiness, all intertwined with our lives, and what we say and do. We don't live alone. We are members of one body. We are responsible for each other. And I tell you that the time will soon come when, if men will not learn that lesson, then they will be taught it in fire and blood and anguish. Good Night" A 1946 and 2002 audience would find some of Mr Birling's comments ironic for example the comment about the titanic "...Bigger and faster all the time. And then Ships. Why, friend of mine went over this new liner last week - the Titanic - she sails next week - forty six thousand eight hundred tons - New York in five days - and every luxury - and unsinkable, absolutely unsinkable..." And a comment about an inevitable war (second world war) ...read more.

Significantly, the Inspector himself neither forgives nor punishes. Each character is made to face up to the fact that they must find the courage to judge themselves: only then will they have learned enough to be able to change. Sometimes, the Inspector behaves as the voice of social conscience: "You see, we have to share something. If there's nothing else, we'll have to share our guilt". He points out that social responsibilities become greater as privileges increase. Having studied the play and seen a faithful television production of it I would like to end by saying that "An Inspector Calls" by J.B Priestly is not just about one well-off old fashioned Edwardian family and one poor working class girl it is a play about morals and the way we should all try to live our lives as best we can and trying not go down the path of the birlings, it is also about not re-making the mistakes that has already happened in the past (Edwardian society) and so a modern 21st century audience can still get some good ideas from a 20th century play. The Inspector's dire warning, that if we don't have a social conscience and be more responsible for each other we will pay the price, this can still be relevant today by a way of guidance to show how we can end up if we follow the Birlings' route. Chris Hunt 11W3 Page 1 of 3 ...read more.