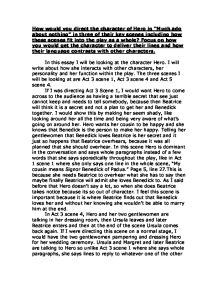 How would you direct the character of Hero in

How would you direct the character of Hero in "Much ado about nothing" in three of their key scenes including how these scenes fit into the play as a whole? Focus on how you would get the character to deliver their lines and how their language contrasts with other characters. In this essay I will be looking at the character Hero. I will write about how she interacts with other characters, her personality and her function within the play. The three scenes I will be looking at are Act 3 scene 1, Act 3 scene 4 and Act 5 scene 4. If I was directing Act 3 Scene 1, I would want Hero to come across to the audience as having a terrible secret that see just cannot keep and needs to tell somebody, because then Beatrice will think it is a secret and not a plan to get her and Benedick together. I would show this by making her seem shady, like looking around her all the time and being very aware of what's going on around her. ...read more.

If I were directing this scene on a normal stage, I would have the two gentlewomen pampering and dressing Hero for her wedding ceremony. Ursula and Margret and later Beatrice are talking to Hero so unlike Act 3 scene 1 where she says whole paragraphs, she says lines to reply to whatever one of the other women have said. "God give me joy to wear it, for my heart is exceeding heavy." It seems to me that in this scene that Beatrice is trying to ward of Hero from marrying Claudio. " Ye light o'love with your ............ lack no barns," page 91, lines 35 an 36. By this time she knows that Benedick loves her, so I don't know why she would want to destroy Hero's happiness, maybe that's just her mean and spiteful personality, I think this is what her personality is bitter because she has had her heart broken before so maybe she is warding Hero not to get her heart broken. Act 5 scene 4 has Leonarto, Benedick, Margaret, Ursula, Antonio, Fraiar Francis and Hero. ...read more.

To conclude this essay I would like to say that this play was really boring. It's said to be full on romance and drama and I suppose by Shakespearean standards it is, but today its really boring. Hero is a really timid, quiet and boring character. When her love claims she cheated on him, she faints. How boring is that? She could at least answer him but it's left to Beatrice to do it for her because she fainted and even if she hadn't she wouldn't of been able to get a word in edge ways because Beatrice never shuts up. If doing a modern version of this play I would have to make Hero a bit more like Beatrice, feisty. She should stand up for herself more and speak more often instead of waiting for approval. But then the contrast between the two might be lost so she wouldn't be able to be too much like Beatrice so there is a distinct difference. This might appeal to Shakespearean women who have dreamed of not having to obey their fathers or husbands for once. It might not appeal to Shakespearean men because they might think that it will give their wives/daughters ideas. By Louise West ...read more.