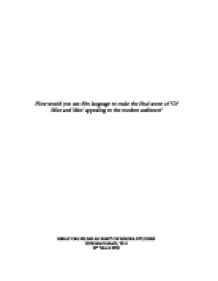 How would you use film language to make the final scene of 'Of Mice and Men' appealing to the modern audience?

How would you use film language to make the final scene of 'Of Mice and Men' appealing to the modern audience? ESSAY ON FILMS AS PART OF MEDIA STUDIES HISHAM HASAN, Y9-2 26th March 2002 How would you use film language to make the final scene of 'Of Mice and Men' appealing to a modern audience? The media is a mode through which authors, poets, directors and others express their thoughts and try to persuade and/or inform an audience. The film is a completely different medium than the other media such as prose and poetry, the radio, theatre, newspaper and press, etc to convey a director/creator's thoughts, feelings and decisions to an audience. The major difference is that it is primarily a visual agent to communicate an individual viewpoint. Besides, films are not meant to dwell on, as they cannot be referred back to, so the viewer's first impression may form his/her final judgement of the film's plot, thoughts and messages. Thus, the film must be designed to be very direct, emphasised and should follow the director's intentions accurately throughout. In addition, films cannot be expected to give every descriptive detail as like in a novel's vivid imagery; rather, for every scene, they convey a few camera shots to reveal descriptions. Films, therefore, rely on indications of their intentions to the audience. Second, the film medium is distinctive from the other media, specifically the theatre, in that it creates a visual image from several angles and perspectives, whereas in theatre, the spotlight and the audience's eye is supposed to be on the speaker only. However, this does not mean that the film medium is any more or less effective that the other media, etc. Actually, the plot of a film may add life to a fantasy or fiction, and make them seem more realistic, as the camera records in real life. This fact allures more the youth of today who seem to enjoy movies more than novels (both fiction/non-fiction), which are blander. ...read more.

When he crouches down after Lennie is shot, his ashamedness due to his failure to protect Lennie is the most salient feeling. In the last part, sad music reflects George's mental conditions, which are in a much-disarrayed state. Our reflection of general setting, lighting and colours in conveying to the film audience the tragic event were very intense and more direct that Horton Foote's spare usage of these. He often used foreshadowing; this is also evident in one of our scenes. In the end, generally our main endeavour was to reveal the extent of George and Lennie's friendship and still, the selfishness of the outside world. However, the main difference between Foote's movie ending and ours was that he was far more direct and abrupt in presenting his characters. Ultimately, I think we were very successful in producing our unique interpretation of Lennie's demise and George's thoughts, and I am confident our film sequence will go a long way in reaching out to most variety of audiences. HMH/msc - Establishing Shot - Setting - Camerawork: a) Angles of shot b) Type of shot c) Panning, tilting d) Cutting from shots, dissolve into next scene e) Camera FX - Clothes / Costumes - Lighting - Plot (what happens) - Use of colour: a) Advancing colours b) Receding colours c) Dull/bright colours, atmosphere - Body language/gestures - Characterisation: a) Appearance (why was this person cast) b) Dialogue c) Actions & gesture d) Internal action (flashback, dream sequences, music) e) Reactions of other characters In soundtracks/sound FX, consider: - Ambient Sounds: a) Invisible/visible b) Type of sound - Dead track Generalised score: captures overall emotion/atmosphere - Music Mickey-mousing: matches overall emotion of characters Motif: symbolism/reminder of something good/bad Follows action, builds tension Mood-enhancing, emotional When forming the dialogue, keep in mind: Choose dialogue you want to keep/leave out or add to. Keep to the dialect. Do not change without good reason. ...read more.

I was never mad. Just get that" Smooth dissolve, moderate pace. Establishing shot: Long shot of the clearing and the leaves. Camerawork and plot: Subjective - waist high shot - George and Lennie sit very close to each other. Setting is blurry. Indirect subjective shot shows George leaning on the brush behind Lennie. Middle shot: George would take out the Luger and then would look away and crouch and then the shot. Lennie would collapse in a long shot and camera would return back to the black spot on top of the Gabilan mountains as low-angle shot. In the end, a fade out of George walking past Lennie with the rabbit in his arms. Lighting: Generally low-key lighting. Dark, greyish shadows and reflections on the green pool. Body language/gestures: George looks Lennie full into the eye and Lennie looks on the brush floor. Character's specialties: At the end, Lennie's dialogue would be very ineffective, un-triumphant and he would be broken-down. Ambient Sound: a) Sound/squeaking of mice b) Distant howling of wolf, shepherd dog tramples on mice, birds chirp, human voices Music: a) Generalised score b) The ending music reveals George's thoughts and feelings: it is filled with his tension, relief and grief. It is like his heart's music. Lennie says: "George, tell like you done before." George: "Tell you what Lennie?" "Bout the other guys an' about us." George: "Here we go: Guys like us got no fambly. They make a little stake an' then they blow it in. They ain't got nobody in hell that gives a damn about 'em------" Lennie: "Because I got you and you go me." Lennie: "How's it gonna be, George?" George: "Lennie, look acrost' the river so you can almost see it." George: "A cow, and maybe we'll have some chickens...and down the flat...a patch of alfalfa." Lennie: "George, why ain't you giving me hell?" George: "Lennie, you're a good soul. I don't need to get you no rabbits, the rabbits'll come to you themselves." Lennie: "I never deserved it, the place and the rabbits, don't give 'em to me...-----." ...read more.