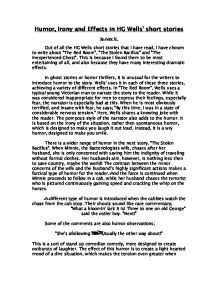 Humor, Irony and Effects in HG Wells' short stories By Alex RL Out of all the HG Wells short stories that I have read, I have chosen to write about "The Red Room", "The Stolen Bacillus" and "The Inexperienced Ghost". This is because I found them to be most entertaining of all, and also because they have many interesting dramatic effects. In ghost stories or horror thrillers, it is unusual for the writers to introduce humor to the story. Wells' uses it in each of these three stories, achieving a variety of different effects. In "The Red Room", Wells uses a typical young Victorian man to narrate the story to the reader. While it was considered inappropriate for men to express their feelings, especially fear, the narrator is especially bad at this. When he is most obviously terrified, and insane with fear, he says; "By this time, I was in a state of considerable nervous tension." Here, Wells shares a knowing joke with the reader. The pompous style of the narrator also adds to the humor. It is based on the irony of the situation, rather then spontaneous humor, which is designed to make you laugh it out loud. ...read more.

Clayton then explains how much he had to drink before his encounter with the ghost. "I'd dined, I'd had a bottle of champagne, and being all alone, perhaps two or three - or even four or five- whiskies, so I was solid as rocks." Here, Claytons claim strikes the reader as ironically humorous when set against the volume of alcohol he has consumed. Although 13 years separates the writing of "The Red Room" and "The Inexperienced Ghost", it is the mixture of irony and cynicism which gives the later story its more modern feel. Irony is not so evident in "The Red Room" and it does not involve the entertaining plot that Wells offers in the last story. It arises from the narrators lack of self awareness through his descriptions of his actions, Wells allows the reader to know what the narrator is feeling. At the same time, the narrator desperately attempts to convince both himself and the reader that he is in control. At one point he tells us how he started to "string some rhymes". This instantly tells the reader that the narrator is becoming overcome with fear. However, the narrator still tries to convince the reader that he is completely calm: "My mind, however, was perfectly clear". ...read more.

Having got the over the shock, the reader naturally reminisces to Clayton's confidence: "I shall get to the end of these passes and this hearth rug shall be vacant" It is evident that Clayton "knew" he was going to travel to the "world of shades" and in doing so prove them wrong and play a huge practical joke on his friends. The irony is that the final joke is at his own expense. He may have traveled to the "world of shades", but he also ended his own life. "The Inexperienced Ghost" appeals to modern readers because of the modern humor it had. When Wells wrote "The Red Room" there was a huge market for ghost stories. It was one of the very first stories he wrote commercially, and because of the huge demand he did not have to try very hard to entertain the reader. "The Red Room" is an enjoyable story on the whole, but very predictable. By 1906, when he wrote "The Inexperienced Ghost", the appetite for ghost stories had fallen, and Wells had to work much harder to thrill the reader. The use of a double narrator and a complex structure allows him to manipulate some brilliant twists in the tale, which modern readers still find satisfying to read to this day. ...read more.