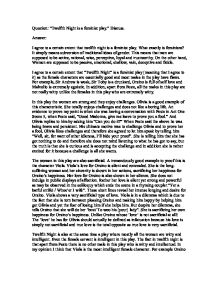 I agree to a certain extent that twelfth night is a feminist play. What exactly is feminism? It simply means subversion of traditional ideas of gender. This means that men are supposed to be active, rational, wise, perceptive, loyal and trustworthy. On...

Question: "Twelfth Night is a feminist play." Discuss. Answer: I agree to a certain extent that twelfth night is a feminist play. What exactly is feminism? It simply means subversion of traditional ideas of gender. This means that men are supposed to be active, rational, wise, perceptive, loyal and trustworthy. On the other hand, Women are supposed to be passive, emotional, shallow, vain, deceptive and fickle. I agree to a certain extent that "Twelfth Night" is a feminist play [meaning that I agree to it] as the female characters are essentially good and most males in the play have flaws. For example, Sir Andrew is weak, Sir Toby is a drunkard, Orsino is full of self love and Malvolio is extremely egoistic. In addition, apart from Feste, all the males in this play are not really witty unlike the females in this play who are extremely witty. In this play the women are strong and they enjoy challenges. Olivia is a good example of this characteristic. She totally enjoys challenges and does not like a boring life. An evidence to prove my point is when she was having a conversation with Feste in Act One Scene 5, when Feste said, "Good Madonna, give me leave to prove you a fool." And Olivia replies to him by asking him "Can you do it?" When Feste said the above he was being brave and persistent. ...read more.

She is trying to imply that Sir Andrew is the cause of all the jokes she has been making so about him so far. Straight after this she exits, but Sir Andrew does not utter a word about the comment she made, this happened most likely because he did not understand what she said as it might have been too complex for him to understand. Another evidence that shows us that Maria employs wit and intellect is when she wants to take revenge on Malvolio when she says, "Sweet Sir Toby, be patient for tonight. Since the youth of the Count's was today with my lady, she is much out of quiet. For monsieur Malvolio, let me alone with him. If I do not gull him into a nayword, and make him a common recreation, do not think I have wit enough to lie straight in my bed. I know I can do it." This shows that she is a very strong lady and has a lot of confidence in herself. She is also very sure of what she is doing and she makes full use of her wit. This all sums up and tells us that in this play the women are rather intelligent. Because besides Feste, all the other males are rather laid-back and slack. They are not really intelligent or for some cases like Sir Andrew, he is not intelligent at all, but is only a good source of entertainment. ...read more.

Sir Andrew is so stupid to the extent that he does not even know when someone is making a fool out of him. For example when Sir Toby asked Sir Andrew to dance, he danced thinking that he was looking very professional and elegant, but the truth was that he looked stupid and ridiculous. He is so dim and unintelligent that he does not even know that Sir Toby is making fun of him. This stupid and ridiculous but entertaining dance ends the scene. Sir Andrew also does not even know the meaning of accost and mistakes it for Maria's last name when Sir Toby tells Sir Andrew to accost Maria. Sir Toby meant Accost as in to assail Maria, to make love with Maria, to get on top of Maria, but Sir Andrew took it the wrong way thinking that it was Maria's last name. In conclusion, I only disagree because Feste brings out the main theme of the play. Women are deceptive meaning Viola is in disguise and Olivia indulges in pretenetence. In this play, men also make the choice and women do not really have a say they do not really have a voice and have no place to voice their feelings. But in an overall conclusion, If I am really asked to make a decision, I would surely say that yes, Twelfth Night is a feminist play because all the women are witty wherelse only one male is witty and entertainment is not all that is needed in a play there are also other factors to consider. ...read more.