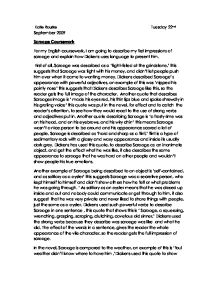 I am going to describe my first impressions of Scrooge and explain how Dickens uses language to present him.

Katie Rourke Tuesday 22nd September 2009 Scrooge Coursework For my English coursework, I am going to describe my first impressions of scrooge and explain how Dickens uses language to present him. First of all, Scrooge was described as a 'tight-fisted at the grindstone,' this suggests that Scrooge was tight with his money, and didn't let people push him over when it came to wanting money. Dickens described Scrooge's appearance with powerful adjectives, an example of this was 'nipped his pointy nose' this suggests that Dickens describes Scrooge like this, so the reader gets the full image of the character. Another quote that describes Scrooges image is ' made his eyes red, his thin lips blue and spoke shrewdly in his grating voice' this quote was put in the novel, for effect and to catch the reader's attention, to see how they would react to the use of strong verbs and adjectives put in. Another quote describing Scrooge is 'a frosty rime was on his head, and on his eyebrows, and his wiry chin' this means Scrooge wasn't a nice person to be around and his appearance scared a lot of people. ...read more.

Dickens gives the impression that everyone knew scrooge and when he was coming, for example even the blindmans dog appeared to know him,' Dickens used this quote to give more effect that not only humans knew him but also animals. Dickens gives the effect that people are scared of scrooge, an example of this is 'no beggars implored him to bestow a trifle' this suggests that no matter what poor people didn't stop him in the street to ask for spare change, this is because they knew his immediate reaction to them. Another example of this is 'no children asked him what it was o'clock' this suggests that even children was scared to ask him a basic question like what time was it. Scrooge liked people avoiding him, this was because they always asked him for money, that he never had for poor people, an example of this was 'it was the very thing he liked' this suggests that scrooge knew he wasn't liked and he didn't want to change that. Scrooges attitude towards people was very negative, scrooge didn't like people because they were all poor and asking him for money, also because he was rich, he thought he was better than them all. ...read more.

Scrooge shows a negative attitude towards christmas, this may of been caused by his childhood, when he was neglected by his father when he was young and didn't experience christmas in a family. Scrooges attitude towards christmas is entirely different from his family members and other people, an example of this is his own saying, 'bah humbug' this is a familar saying that scrooge says alot in the novel, dickens uses this phase alot, to emphasise scrooges attitude to christmas. Furthermore, in the novel, Scrooge had no feelings toward his family or friends and held a strictly professional relationship with them, creating a hostile bond between them. For example, the clerks wife does not like the idea have toasting to Scrooge because of the way he treats his long time employee. Dickens shows different themes that society should learn to live by everyday and not just holidays or special occasions. Scrooge learns these lessons with the visit of three spirits and a journey into his painful past and future so he could see his attitude towards people; this allows him to change and create a new path for himself other than the one set out. The novel makes readers aware of their personal attitudes and presents a way to change for the better. ...read more.