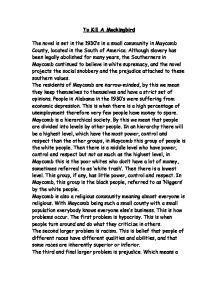 I am going to write about the two main problems in Maycomb society which are racism and prejudice. Racism is an unjustified negative attitude towards people of a different race.

To Kill A Mockingbird The novel is set in the 1930's in a small community in Maycomb County, located in the South of America. Although slavery has been legally abolished for many years, the Southerners in Maycomb continued to believe in white supremacy, and the novel projects the social snobbery and the prejudice attached to these southern values. The residents of Maycomb are narrow-minded, by this we mean they keep themselves to themselves and have a strict set of opinions. People in Alabama in the 1930's were suffering from economic depression. This is when there is a high percentage of unemployment therefore very few people have money to spare. Maycomb is a hierarchical society. By this we mean that people are divided into levels by other people. In an hierarchy there will be a highest level, which have the most power, control and respect than the other groups, in Maycomb this group of people is the white people. Then there is a middle level who have power, control and respect but not as much as the highest level, in Maycomb this is the poor whites who don't have a lot of money, sometimes referred to as 'white trash'. Then there is a lowest level. This group, if any, has little power, control and respect. In Maycomb, this group is the black people, referred to as 'Niggers' by the white people. Maycomb is also a religious community meaning almost everyone is religious. With Maycomb being such a small county with a small population everybody knows everyone else's business. This is how problems occur. The first problem is hypocrisy. This is when people turn around and do what they criticize in others. The second larger problem is racism. This is belief that people of different races have different qualities and abilities, and that some races are inherently superior or inferior. The third and final larger problem is prejudice. ...read more.

You can pay me back tomorrow",. This is another mistake because Miss Caroline should have known that he couldn't afford a quarter just by looking at the him. What Miss Caroline should have done was take Walter aside and ask him the questions instead there instead of in front of the class which was embarrassing for Walter. This is prejudiced because she judged Walter without knowing him which suggests that Miss Caroline is not very observant and doesn't pay a lot of attention. Scout is a very prejudice girl for her age. She judges a lot of people without knowing them. She physically abused Walter Cunningham because he didn't thank her when she tried to stick up for him in the argument with Miss Caroline. She rubbed his nose in the dirt but was stopped by jem. I think that she holds a grudge against people who don't appreciate things and people with no manners. Scout should have seen the situation from Walters point of view. If she had, she maybe would have suggested that Walter didn't have the same upbringing as she did. He may have been brought up without being learnt any manners. Scout shouldn't go round thinking everybody is like her. Just because Walter didn't automatically thank scout that doesn't mean he wasn't grateful for what she did; scout should have seen this possibility. During the meal with Walter scout made some comments on Walters actions. Walter poured molasses over his food because he didn't know that it was good quality food, scout made a comment 'what the Sam hill are you doing'; Calpurnia was furious!. She spoke to Scout in the kitchen. She told her not to contradict people who don't eat like themselves, she gave her a big hollering; Scout shouldn't have judged Walter because she should have known that Walter had come from a different background. She had made a comment that judged Walter without having good reason. ...read more.

She has also shown us that not everybody is truthful or trustworthy. The reason why I think Harper Lee wrote 'to kill a mockingbird' is because she wanted to expose how many faults there were in such a small town. Harper lives in a similar small town called Monroeville. She would have also been about the same age as Scout when the book was set so I see this book as an autobiography based on her childhood. I also think she wrote the book to identify the sort of people she liked and did not like. The novel is full of characters who are hypocritical, violent and prejudiced; obviously these are the kind of people she dislikes. I also think that Harper agrees with people that are tolerant and a lot like Atticus, who I think she adores. The book is a hopeful novel because it took the jury a long time to come to a decision to whether Tom was guilty or innocent. This gives the impression that there is hope for Tom to be found innocent. The more important issue is that Harper hopes that people in the future will not be prejudice or racist. The big message that I think Harper is desperate to spread is that she hopes people will see thing from other peoples point of view or as Atticus said in the book, " you never really understand a person until you consider things from his point of view...until you climb into his skin and walk around in it". This is true because you never really know what a person is feeling until you imagine yourself in their position. Harper is also trying to express that there are people in the world who are dangerous and evil but on the other hand there are people who are kind, loving and do nothing to harm us hence the sentence 'SHOOT ALL THE BLUEJAYS YOU WANT, IF YOU CAN HIT 'EM, BUT REMEMBER IT'S A SIN TO KILL A MOCKINGBIRD.' ?? ?? ?? ?? ...read more.