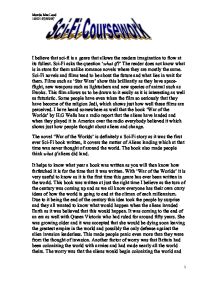 I believe that sci-fi is a genre that allows the readers imagination to flow at its fullest. Sci-Fi asks the question 'what if?' The reader does not know what is in store for them unlike romance novels where they are mostly the same.

I believe that sci-fi is a genre that allows the readers imagination to flow at its fullest. Sci-Fi asks the question 'what if?' The reader does not know what is in store for them unlike romance novels where they are mostly the same. Sci-Fi novels and films tend to be about the future and what lies in wait for them. Films such as 'Star Wars' show this brilliantly as they have space-flight, new weapons such as lightsabers and new species of animal such as Ewoks. This film allows us to be drawn to it easily as it is interesting as well as futuristic. Some people have even taken the film so seriously that they have become of the religion Jedi, which shows just how well these films are perceived. I have heard somewhere as well that the book 'War of the Worlds' by H.G Wells has a radio report that the aliens have landed and when they played it in America over the radio everybody believed it which shows just how people thought about aliens and change. The novel 'War of the Worlds' is definitely a Sci-Fi story as it was the first ever Sci-Fi book written, it covers the matter of Aliens landing which at that time was never thought of around the world. ...read more.

These are all very, very, very, very boring. In the last proper paragraph on page thirty one he implies that everything will be alright, he then in the next few lines reveals that everything is not going to be alright when he says '' So some respectable dodo in the Mauritius might have lorded it in his nest, and discussed the arrival of that shipful of pitiless sailors in want of animal food, ''We will peck them to death tomorrow, my dear'' this shows that the dodo believed that they would destroy the sailors when in the end the sailors killed and ate every dodo leaving them extinct, he is comparing the humans to the dodo saying that the humans believe they will destroy the Martians when really they won't. I think that the Author H.G Wells chose a philosopher for his main character as it allows him to make the Victorian reader believe what he is saying rather than thinking he is just a crazy Victorian peasant, philosophers were also quite well respected which helps a lot in the long run as well. He is married so that the Victorians don't think that he is unsociable and mad(after all he did lose his hat). ...read more.

''I think everyone expected to see a man emerge-possibly something a little unlike us terrestrial men, but in all essentials a man. I know I did.'' This confirms he is writing in first person as he says I know I did. I think that the rest of the book compares well to the first seven chapters of the book. It keeps the interest if not builds the interest in the book and as more and more events conclude the reader becomes more and more hooked on the book, having the role Wells gave himself helped the story to be believable a lot more as he is actually a very important person for these times and very well respected, we could say he is a man who would be listened to. I think on a whole the book is very well written and has a good use of language which hooks the reader in well. It has quite a slow start as the story actually only commences on page three, up to then we have just been getting descriptions which do not help massively. In all I believe that the Author H.G Wells is successful in getting you to read on just as long as you do not drop out after the first three pages. Murdo MacLeod 10HH 07/05/07 1 ...read more.