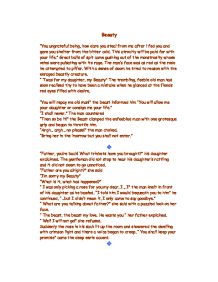 I have chosen beauty and the Beast as the fairytale I was going to manipulate in the style of Angela Carter. In the original tale Beauty is thought of as a selfless woman who is willing to sacrifice for both her father and the Beast

Beauty "You ungrateful being, how dare you steal from me after l fed you and gave you shelter from the bitter cold. This atrocity will be paid for with your life." Great balls of spit came gushing out of the monstrosity whose veins were pulsating with its rage. The man's face was as red as the rose he attempted to pilfer. With a sense of doom he tried to reason with the enraged beastly creature. " 'Twas for my daughter, my Beauty" The trembling, feeble old man had soon realised thy to have been a mistake when he glanced at the fiends red eyes filled with desire. "You will repay me old man!" the beast informed him "You will allow me your daughter or consign me your life." "I shall never." The man countered "Then so be it!" the Beast clamped the enfeebled man with one grotesque grip and began to throttle him. "Argh... argh... no please!" the man choked. "Bring her in the 'morrow but you shall not enter." ? "Father, you're back! What trinkets have you brought?" his daughter exclaimed. The gentleman did not stop to hear his daughter's rattling and it did not seem to go unnoticed. "Father are you alright?" she said "I'm sorry my Beauty" "What is it, what has happened?" " I was only picking a rose for you my dear, I... I" the man knelt in front of his daughter as he bawled, "I told him I would bequeath you to him" he continued, "...but I didn't mean it, I only came to say goodbye." ...read more.

On the eve of her last night at home something extraordinary had happened. The locket that had been forgotten around her neck began to scorch her skin. She woke up and jerked it off. It then began to rise and a hollow voice came from the lustrous object. "Beauty, you are to return to the castle by sunset tomorrow." She recognised the voice to be beast, " I shall not!" she spoke " there is nothing you can do to me!" The object burst into a laminating ball that had an image in it. Edging closer to see, she made out the moving picture of beast. To her astonishment the image began to speak. " I know you do not intend to return to me, so I will say this before it is too late. I love you beauty." Beauty almost laughed at this, " How can you love me when you don't even know me?" she questioned. " Did your heart not warm when you found the rose at your side each morning? Did you not love whoever sent you those love poems each meal? Did you not hope that those feelings were reciprocated? Beast enquired "Leave me be!" demanded Beauty, " You cannot simply have whatever takes your fancy." "I bid you farewell," and with that the ball dispersed into tiny specs. ? The dialogue with beast rung in her mind, "did you love whoever sent you love poems at the mealtimes, did you not wish the feeling be reciprocated?" ...read more.

" I was only picking a rose for you my dear, I... I" They also act as a filler. "The colossal walls were laden with exquisite gold and an enormous pellucid chandelier..." this is used to give the reader an idea of what Beauty is seeing the same way Carter describes to us what her female character in "The Bloody Chamber" is seeing "with its turrets of misty blue, its courtyard, its spiked gates..." The Beast who has the description of a wolf "four-inch fangs protruding from his mouth with paws that appeared to possess claws of a frightful nature." Is once again similar to that of Carter's "The Company of Wolves" "Those slavering jaws; the lolling tongue; the rime of saliva on the grizzled chops". Although Beast has the features of a wolf he has the qualities and behaviour of a man" I know you do not intend to return to me, so I will say this before it is too late. I love you beauty." The same way as Carter's beast in "The Courtship of Mr Lyon" "Since you left me, I have been sick" The target audience of this story are young girls. Children are affected by what they read and since this story's female character is one that does not sacrifice herself for any male so to will they be inspired to do the same. Female authors like Angela Carter help to subvert the patriarchy found in many young children's literature mainly because they are authored by males. Although Carter's writing is for adults it is still a step forward for women of our time. ...read more.