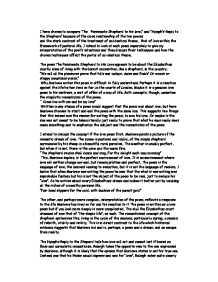 I have chosen to compare 'The Passionate Shepherd to his love,

I have chosen to compare 'The Passionate Shepherd to his love," and "Nymph's Reply to the Shepherd' because of the close relationship of the two poems and the stark contrast of the treatment of an identical theme, that of love within the framework of pastoral life. I intend to look at each poem separately to give my interpretation of the poet's intentions and then discuss their techniques and how the chosen techniques affect the portal of an identical theme. The poem The Passionate Shepherd to His Love appears to be about the Elizabethan courtly ideal of living with the barest necessities, like a shepherd, in the country. "We will all the pleasures prove that hills and valleys, dales and fields' Or woods or steppy mountains yields." Why Marlowe writes this poem is difficult to fully understand. Perhaps it is a reaction against the life he has lived so far ,in the courts of London. Maybe it is a genuine love poem to his mistress, a sort of offer of a way of life. Both concepts, though, underline the simplistic romanticism of the poem. " Come live with me and be my love" Written in any stanza of a poem would suggest that the poem was about love, but here Marlowe chooses to start and end the poem with the same line. ...read more.

The idyll the Elizabethan court dreamed of was that of "the simple life", as such. The romanticised concept of the shepherd epitomises this, living in the cycle of the seasons, particularly spring, a season of rebirth, vitality and virility. This is in direct contrast to the life which historical evidence suggests that Marlowe led and is, perhaps, a poem and a dream, and an escape from reality. The Nymphs Reply to the Shepard tells how love will not and cannot last if based on false and unrealistic romanticism. Raleigh takes the opposite view to the one expressed by Marlowe, although it is likely that the opinion that Marlowe states is not his true one. Instead one that he thinks would impress and woo his "love". Raleigh sates quite clearly that idealism is a false premise to base love on and that life and love should be seen in realistic context. Marlowe appears to belvie in romanasisum, Raleigh belives this to be an ideaisic, narrow minded, naivety. He shows this by writing a mimic to Marlowe poem. The first stanza tells us that if the world was not affected by the passage of time, the promise of pastoral love might be achievable but as the world is subject to the passage of time the promises are empty and unobtainable. ...read more.

The same river is used by Raleigh to challenge Marlowe to show that the same object can have a different effect depending on the way it is presented., It also is an image of time. Perhaps, just as the torrent will inevitably diminish so will passion as it can only last a certain amount of time because we know nothing can last forever as life as not eternal. The poem The Nymphs Reply to the Shepard is set out in six stanzas each composed of four lines of similar length. This is a mimic of the layout used by Marlowe, here this gives prominence to the similarity of the two poems. Added to this both poems have a similar rhyme scheme and rhythm: " Come live with me and be my love " and the rhyme scheme of AABB running through both poems and effecting the readers opinion and interpretation. I enjoyed reading both poems which were interesting in the contrasting views of both poets. Whilst Raleigh's view of love is , I would guess , the more realistic, as a young girl I feel that Marlowe's poem is much more romantic and exciting. Perhaps old age will change my opinion.. ...read more.