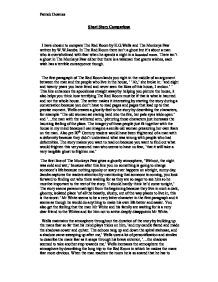 I have chosen to compare The Red Room by H.G.Wells and The Monkeys Paw written by W.W.Jacobs.

Short Story Comparison I have chosen to compare The Red Room by H.G.Wells and The Monkeys Paw written by W.W.Jacobs. In The Red Room there isn't a ghost but it's about a man who is overwhelmed with fear when he spends a night in a haunted room. There isn't a ghost in The Monkeys Paw either but there is a talisman that grants wishes, each wish has a terrible consequence though. The first paragraph of The Red Room lands you right in the middle of an argument between the man and the people who live in the house, ' 'Ah,' she broke in: 'and eight and twenty years you have lived and never seen the likes of this house, I reckon.' ' This line enhances the spookiness straight away by helping you picture the house, it also helps you think how terrifying The Red Room must be if that is what is haunted and not the whole house. The writer makes it interesting by starting the story during a conversation because you don't have to read pages and pages that lead up to that precise moment. Wells creates a ghostly feel to the story by describing the characters, for example 'The old woman sat staring hard into the fire, her pale eyes wide open.' and '...the man with the withered arm,' picturing these characters just increases the haunting feeling of the place. ...read more.

It is as if the room does not want any light there and is extinguishing the candles itself. 'Steady on! I said. These candles are wanted, speaking with a half hysterical facetiousness,' Pre 20th century readers would not have been surprised by something like this, because people believed more in the supernatural, but people today would just laugh at the thought of a haunted room. We now have more understanding about unusual things that happen and can usually have a logical explanation for them. Pre 20th century readers would have felt that the happenings where weird as there is talk of an apoplexy, which they didn't understand. ' I thought, had apoplexy better served the ends of superstition.' People today probably would be a little spooked by a Ganymede and Eagle because it's an old statue which they probably would not be used to, but people in pre 20th century would have been used to seeing this type of statue and so it would not have bothered them. The story of the Monkey Paw would not hold much superstitious value today; if someone said they had a magic Monkey Paw no one would take them seriously. Pre 20th century times were rife with superstition especially when it came to items said to hold magic in them and they would be intrigued by a magic monkey paw. ...read more.

other two wishes and her husbands horror at the thought of using it again, he reminds her that their son has been dead for ten days and that he could only recognise him by his clothes, 'If he was too terrible for you to see then how now?' The tension builds and the climax is reached with the knock at the door and Mr Whites desperate search for the Monkey paw to make his final wish and rid them of whatever is outside the door. He has described the scene well because the characters are in synchronisation. As the knocking gets louder Mrs White gets more excited and her husbands search for the Paw becomes more frantic. In each story I thought the fear and the ghostly atmosphere was built up well throughout both stories but the endings where disappointing. They where both lacking a final climax, in The Red Room the atmosphere built up and built up but then nothing happened because he knocked himself out. Similarly in the Monkeys Paw the knocking grew louder but the son was wished away just as the door was opened. I didn't feel that the Superstitious Man's Story was as affective as the two I chose because it was too short but on the other hand I felt that The Body Snatcher and The Signal Man dragged on, because there was no real suspense towards the end. Patrick Downes ...read more.