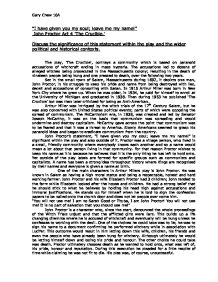 &quot;I have given you my soul; leave me my name!&quot; John Proctor Act 4 'The Crucible.' Discuss the significance of this statement within the play and the wider political and historical contexts

"I have given you my soul; leave me my name!" John Proctor Act 4 'The Crucible.' Discuss the significance of this statement within the play and the wider political and historical contexts. The play, 'The Crucible', portrays a community which is based on paranoid accusations of witchcraft ending in mass hysteria. The accusations led to dozens of alleged witches being prosecuted in the Massachusetts colony; resulting in the death of nineteen people being hung and one pressed to death, over the following two years. Set in the small town of Salem, Massachusetts during 1692, it depicts one man, John Proctor, in his struggle to keep his pride and name from being destroyed with lies, deceit and accusations of consorting with Satan. In 1915 Arthur Miller was born in New York City where he grew up. When he was older, in 1934, he paid for himself to enroll at the University of Michigan and graduated in 1938. Then during 1953 he published 'The Crucible' but was then later criticized for being an Anti-American. Arthur Miller was intrigued by the witch trials of the 17th Century Salem, but he was also concerned with United States political events; parts of which were opposing the spread of communism. ...read more.

She demonstrates over powering characteristics such as when she threatens the girls to keep quiet about the events in the forest: "Let either of you breathe a word, or the edge of a word, about the other things, and I will come to you in the black of some terrible night and I will bring a pointy Reckoning that will shudder you." Abigail said this when Betty, another girl involved, wishes to admit they have done wrong but Abigail flies into her now well known furies and threatens all of the girls to silence. Furthermore she manipulates the entire town and eventually sends nineteen innocent people to their deaths. On the surface Abigail's motives seem simple, that she has simple jealousy and the will to have revenge on Elizabeth. Abigail is driven only by lust for John Proctor and the need for power. The trials allow Abigail to seize her power and pretend to act as though she has a direct connection to God; this empowers the previously powerless Abigail. Abigail now finds that she has a power over people, and so takes full advantage of it, even a mere accusation from Abigail and the girls is enough to convict even the highest and well-respected occupant of Salem. ...read more.

He includes many historical events, facts which allow people to see McCarthyism in a different view as they might have had before. McCarthyism was a movement involved in the hunting down and exposing of people who were communist or communist related; those found guilty were not executed like they would have been in the other situation of Salem witch trials but many suffered damage to there reputations and lifestyles. The Crucible tells about people who have lived in a social society where authority needs to be questioned and where opinion leads to punishment and rejection. It is in human nature for greed like it was for Putnam's greed for land and the suspicion of foreigners like Tituba in the time of Salem. These are still carried on to this day but are not as serious as they would have been previously. In conclusion as John Proctor feels strongly about his reputation and moral status he still feels like he has admitted he has done wrong, as a lie, but would not take the full responsibility of losing his livelihood and pride. The wider political contexts are to do with McCarthyism and how America was affected during that time just as Salem was during its Witch Hunts. Arthur Miller refers back to facts and tries to involve many different aspects of Salem while comparing them to America. ?? ?? ?? ?? Gary Chew 10A ...read more.