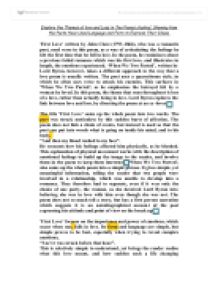 I think that although the 'First Love' and 'When We Two Parted' are different due to the fact that one focuses on love and the other on loss. The difference in language of the two poems is tied up with the theme

Explore the Themes of love and Loss in Two Poems studied, Showing How the Poets Have Used Language and Form to Express Their Ideas. 'First Love' written by John Clare (1793-1864), who was a romantic poet, used verse in this poem, as a way of articulating the feelings he felt the first time that he fell in love. In the poem, he reminisces about a previous failed romance which was his first love, and illustrates in length, the emotions experienced. 'When We Two Parted', written by Lord Byron, however, takes a different approach to the way that a love poem is usually written. The poet uses a quarrelsome style, in which he often uses verse to attack his enemies. This surfaces in 'When We Two Parted', as he emphasises the betrayal felt by a woman he loved. In this poem, the theme that runs throughout is loss of a love, rather than actually being in love. Lord Byron explores the link between love and loss, by directing the poem at an ex-lover. The title 'First Love' sums up the whole poem into two words. The poet was struck motionless by this sudden burst of affection. The poem does not link a chain of events, but instead is used so that the poet can put into words what is going on inside his mind, and to his body, "And then my blood rushed to my face". He recounts how his feelings affected him physically, as he blushed. ...read more.

These feelings need to be brought to the attention of the reader, so that the reader can understand fully that the sudden rush of affection can over take ones body, "My face turned pale, as deadly pale". John Clare repeats the word pale, to bring to the surface the power behind first love. He uses it twice so that the reader does not just forget about that particular part of the feeling, but remembers that the loss of face colour was apparent. The tone of 'First Love' is fairly complex. The poet expresses a serious sort of romance. There is no humour at the fact that he fell for a person who did not even acknowledge his presence. He uses rhetorical questions to show that his world was turned upside down. "Are flowers the winter's choice? Is loves bed always snow?". John Clare explains that his world has now been transformed, and reacts to the sudden change to his physical and emotional state. This is also juxtaposition, as flowers are normally associated with the summer, but here they are contrasted to the coldness of winter. This contrast is showing the difference between not knowing love and experiencing it. The tone of 'When We Two Parted', is somehow more sorrowful. The poet is extremely reflective, and bitter towards his former love, "They name thee before me, a knell to my ear". Lord Byron expresses his hatred in the fact that he can not even bare to hear her name. ...read more.

He feels foolish because he has only just become aware that the whole relationship was based on an illusion, and as he has only just discovered it, he feels regretful, ashamed, and is grieving. In both poems there is also a regular rhyming scheme, they have simple, poetic forms, yet they have different purposes. In 'First Love' and 'When We Two Parted', there is an alternate rhyme scheme, in which every second line rhymes. 'First Love' has a song-like rhythm, which is evident throughout. The purpose of this is to make the reader taken-aback by the descriptive words, and entwine them into the emotion. 'When We Two Parted' has an unusual content, with a theme of loss and a bitter tone. This tone is unusual, and therefore interesting, because it is nature to be curious of the unknown and interested in the new. At the end of 'First Love' there is a disruption to the rhythm and harmony mimicking the change in the physical and emotional state of the writer. The two poems overall have quite a similar form, although they put across different viewpoints. They also use different ways of verbalising their point of view, such as alliteration and similes. Both poems are very affective in catching the reader's attention and interesting them. I think that although the 'First Love' and 'When We Two Parted' are different due to the fact that one focuses on love and the other on loss. The difference in language of the two poems is tied up with the theme, simple and traditional words, used in a different tone and for different purposes for the two poems. ?? ?? ?? ?? ...read more.

This essay shows a good knowledge of both poems as well as a knowledge of poetic devices and techniques, but the writer becomes increasingly repetitive and should aim to include other ideas about each writer's approach. ***