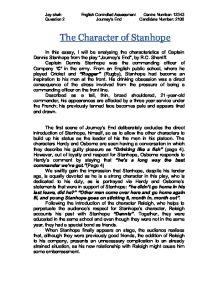 I will be analysing the characteristics of Captain Dennis Stanhope from the play Journeys End, by R.C. Sherriff.

The Character of Stanhope In this essay, I will be analysing the characteristics of Captain Dennis Stanhope from the play "Journey's End", by R.C. Sherriff. Captain Dennis Stanhope was the commanding officer of Company 'C' in the army. From an English public school, where he played Cricket and "Rugger" (Rugby), Stanhope had become an inspiration to his men at the front. His drinking obsession was a direct consequence of the stress involved from the pressure of being a commanding officer on the front line. Described as a tall, thin, broad shouldered, 21-year-old commander, his appearances are affected by a three year service under the French; his previously tanned face becomes pale and appears tired and drawn. The first scene of Journey's End deliberately excludes the direct introduction of Stanhope, himself, so as to allow the other characters to build up his status as the leader of his the men in his platoon. The characters Hardy and Osborne are seen having a conversation in which they describe his guilty pleasure as "Drinking like a fish" (page 4). ...read more.

"Stanhope: It's five to eight now. You better go and relieve Hibbert. Then you can come back at eleven o'clock and black in three of your bloody little circles. Trotter: I 'aven't 'ad my apricots yet!" (Page 22) Again, through the judgements of the other characters, R.C. Sherriff allows us to realise that Stanhope is exceedingly depressed with life at the front and his nerves have been exhausted over the last three years. /having only been 18 years old when he joined, he had become the commander, and even though his 'worshippers' saw him as fearless, Stanhope reassured Hibbert that he too is petrified by the horrors of war, but has hope as he thinks of life after the war is over, "Because I feel the same - exactly the same! Every little noise up there makes me feel - just as you feel. Why didn't you tell instead of talking about Neuralgia? We all feel like you do sometimes, if you only knew. I hate and loathe it..." - Stanhope. (Page 57) On the other hand, he frantically tries to hide his emotions that show tension and pain by drinking heavily and wallowing in self-pity. ...read more.

To both Osborne and Raleigh, he is a close friend, who they consistently back up, "His experience alone makes him worth a dozen people like me." Osborne (Page 6), "I'm awfully proud to think he is my friend." Raleigh (Page 48). As the commander, his job is to issue and follow orders. At times his actions are ruthless and questionable; nevertheless he merely does what he is told. This would make us regard him as robotic in the sense that he follows orders, but his emotions beg to differ. For example: "My God! You bloody little swine - you think you're the only soul who cares! ...The one man I could trust - my best friend - the one man I could talk to as man to man - and you think I don't care". Stanhope (Page 91), this proves that he is human and is affected by the war. His men are inadvertently looking up to an emotionally weak yet patriotic commander who takes responsibility for the welfare of his platoon. His struggle to conceal his dejection captivates the audience, restoring him as a hero. ?? ?? ?? ?? Jay shah English Controlled Assessment Centre Number: 12343 Question 2 Journey's End Candidate Number: 2108 ...read more.