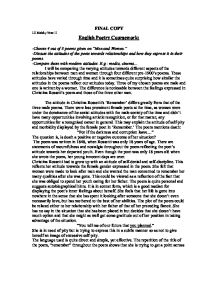 I will be comparing the varying attitudes towards different aspects of the relationships between men and women through four different pre-1900's poems.

FINAL COPY Lil Maisky Year 11 English Poetry Coursework: -Choose 4 out of 8 poems given on "Men and Women." -Discuss the attitudes of the poets towards relationships and how they express it in their poems. -Compare these with modern attitudes. E.g.: media, cinema... I will be comparing the varying attitudes towards different aspects of the relationships between men and women through four different pre-1900's poems. These attitudes have varied through time and it is sometimes quite surprising how similar the attitudes in the poems reflect our attitudes today. Three of my chosen poems are male and one is written by a woman. The difference is noticeable between the feelings expressed in Christina Rosseti's poem and those of the three other men. The attitude in Christina Rossetti's 'Remember' differs greatly from that of the three male poems. There were less prominent female poets at the time, as women were under the dominance of the sexist attitudes with the male society of the time and didn't have many opportunities involving artistic recognition, or for that matter, any opportunities for a recognised career in general. This may explain the attitude of self-pity and morbidity displayed by the female poet in 'Remember.' The poem mentions death: "For if the darkness and corruption leave..." The question is, is death a positive or negative outcome of her situation? ...read more.

The language sometimes tends to get slightly cynical and exaggerated: "When my love swears that she is made of truth," This could suggest that she is making such an effort to prove her fidelity towards her lover, to show him that she is truthful towards him that this leads to him knowing that she is made of anything but truthfulness. The poem shows that truth can be played with, although it is not certain that the final results are very positive. "Sonnet 138" can be compared to the 1970's film, "The Graduate," that involves a superficial relationship between a college graduate and a middle aged woman. Their relationship is purely physical and based on anything but trust, not to mention any form of conversation. 'The Sun Rising' by John Donne written in 1603 consists of two lovers lying in bed at sunrise while questioning the Sun's authority in intruding on them. The poem is extremely hyperbolic in the sense that the statements expressed are exaggerated. The poem consists of a conversation between the poet and the Sun. It is a personally directed argument addressed to the Sun as the Sun is being mocked and subjected to the treatment of an average human being. In a sense, the lovers are reversing roles: they consider themselves the centre of the universe whereas in their eyes the Sun is merely a person interrupting their love. ...read more.

It is clear that there is a resemblance between the attitudes in the three male written poems. They all have playful witty and persuasive comments in them trying to persuade their female partners to do something or other. They are all in need of physical attention, which displays the male need for a sexual relationship. This is not saying that the women in the poems are not needing a physical relationship, as this is demonstrated in "To His Coy Mistress" when she demands for sexual intercourse in the third stanza. However this could be the result of a nudge given by her partner. When comparing the attitudes in the poem with those of today, it is quite surprising to see how similar they actually are in the sense that the poems are quite open when expressing "prohibited" subjects. The attitudes towards men and those towards women in the poems are visibly different. In the three male poems, as the poets are male, the man is the dominant figure of the relationship and does most of the talking. In agreement with the three poets if Christina Rossetti's poem as she explains us that she shares their opinion that the male is the dominant figure of the couple. Andrew Marvell's poem demonstrates the male need for sex. In general the poems show the gender discrimination of the time. Although things have clearly improved since then, there is still quite a long way to go. ...read more.