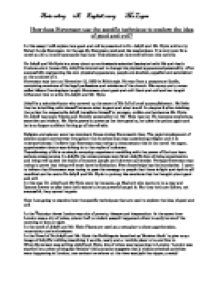 I will explore how good and evil is presented in Dr. Jekyll and Mr. Hyde written by Robert Louis Stevenson.

How does Stevenson use the specific technique to explore the idea of good and evil? In this essay I will explore how good and evil is presented in Dr. Jekyll and Mr. Hyde written by Robert Louis Stevenson. At the age 35, Stevenson produced his masterpiece. It is very rare for a novel so old to be still commonly read now. This shows just how well written this novel is. Dr Jekyll and Mr Hyde is a story about an enthusiastic scientist fascinated with life and death. Curious about human life, Jekyll is determined to change his physical appearance/personality. After successfully engineering his own physical appearance, people are shocked, appalled and astonished at the outcome of it. Stevenson was born on November 13, 1850 in Edinburgh. He was from a prosperous family, containing members of the legal professions and ministers of the church. His nanny and a nurse called Alison Cunningham taught Stevenson about good and evil. Good and evil and her taught influenced him to write Dr.Jekyll and Mr. Hyde. Jekyll is a scientist/doctor who covered up the secret of life full of cruel accomplishment. He feels that he is battling with himself between what is good and what is evil. ...read more.

Hyde by saying that he has 'Satan signature' which means that he has similar attitude, style and has all the ingredients in a way for him to be a Satan, Stevenson is trying to explore how bad some individuals can be. Stevenson explores how Dr.Jekyll is going to transform himself in to Hyde. He also tell us what Jekyll is to say about himself before being transformed" He thanked me with smiling nod, measured out a few minims of the red tincture and added on of the powder" He says that he always wanted to do what he loved mostly doing experiment which shows he is happy with himself and doesn't care about what other people think about him when they sees him. I think this is a magnificent example from Stevenson exploring that no one is born evil; however they are transformed in to a brutal person. The Victorians believed that animals were a lower form of life and man was superior to animals. In the novel Mr. Hyde is compared to a beast and in Victorians view he is lower than man and they thinks that he should be excluded from their society. ...read more.

by Stevenson to answer the Victorians question about Charles Darwin's ideas that human's had a dual nature and ones they get in to their evil habit they can't change it and it look like Dr.Jekyll would be Mr. Hyde permanently. Stevenson is using Charles Darwin idea to express his own idea about science. He is saying that scientists (Jekyll) who play with the nature have to understand what they do that affect people's life's, they had to be responsible and make sure they are not harmed. Robert Louis Stevenson used Mr. Hyde in this novel to personify many of his feeling and thoughts. The downfall of the Dr.Jekyll from an intelligent and caring being to a homicidal beast shows just how society can play a part turning someone in to a real individual. I thought that Stevenson has successfully achieved his aims in clarifying the commingled of human being. Overall I thought, evil is explored using many different devices. Stevenson creates an evil atmosphere using the weather to set the scene. He uses animal imagery- like descriptions for Hyde to show that nothing that evil can be human. However, evil is not always so distant from good as Dr. Jekyll was a combination of both. ?? ?? ?? ?? Amir salimy 10E English; essay Ms.Logan ...read more.