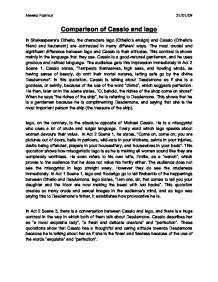 Comparison of Cassio and Iago In Shakespeare's Othello, the characters Iago (Othello's ensign) and Cassio (Othello's friend and lieutenant) are contrasted in many different ways. The most crucial and significant difference between Iago and Cassio is their attitudes. This contrast is shown mainly in the language that they use. Cassio is a good-natured gentleman, and he uses gracious and refined language. The audience gets this impression immediately in Act 2 Scene 1. Cassio states, "Tempests themselves, high seas, and howling winds, as having sense of beauty, do omit their mortal natures, letting safe go by the divine Desdemona". In this quotation, Cassio is talking about Desdemona as if she is a goddess, or saintly, because of the use of the word "divine", which suggests perfection. He then, later on in the scene states, "O, behold, the riches of the shop come on shore!" When he says "the riches of the ship", he is referring to Desdemona. This shows that he is a gentleman because he is complimenting Desdemona, and saying that she is the most important person the ship (the treasure of the ship). ...read more.

This quotation creates so many crude and sexual images in the audience's mind, and as Iago was saying this to Desdemona's father, it establishes how provocative he is. In Act 2 Scene 3, there is a conversation between Cassio and Iago, and there is a huge contrast in the way in which both of them talk about Desdemona. Cassio describes her as "a most exquisite lady", "a fresh and delicate creature" and "perfection". These quotations show that Cassio has a thoughtful and caring attitude towards Desdemona because he is talking about her as if she is the finest and flawless because of the use of the words "exquisite" and "perfection". However, in this conversation, Iago describes Desdemona as "sport for Jove" and "full of game". These quotations show that Iago thinks of Desdemona in his usual crude and misogynistic way, because throughout the play, he makes women sound like they are sluts. "Jove" is the king of the gods and he is known for his sexual prowess. ...read more.

Iago's view of reputation is very basic and straight forward. Both Cassio and Iago's ideas of reputation more or less sum up their views about other things. For example, their views about women - Cassio is very sensitive and caring to them, and Iago is very blunt and candid to them. The way they speak summarises the views of the characters in a way too, because Cassio is caring so he speaks in a poetic manner (which goes with his spiritual view of reputation), and Iago is crude so he speaks in an uncomplicated and less graceful manner (which goes with his straight forward view of reputation). In conclusion, the differences between Cassio and Iago are portrayed mainly through their attitudes and beliefs about other people (mainly women), and they views about important parts of their lives. Shakespeare emphasises this contrast with the language and the way in which they speak, and it is very effective as the contrast is obvious to the audience. ?? ?? ?? ?? Meera Parmar 21/01/09 ...read more.

This response analyses form and language to some extent but there is no analysis of structure and the points are not connected to the whole play. The context of analysis must always be considered in order to demonstrate an understanding of the text.