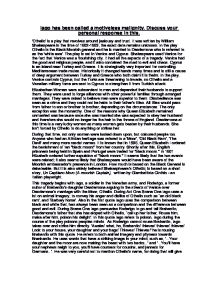 Iago has been called a motiveless malignity. Discuss your personal response in this.

Iago has been called a motiveless malignity. Discuss your personal response in this. 'Othello' is a play that revolves around jealousy and trust. It was written by William Shakespeare in the time of 1602-1603, the exact date remains unknown. In the play Othello is the Black Moorish general and he is married to Desdemona who is referred to as the 'white ewe'. The play is set in Venice and Cyprus. Shakespeare used Venice for the fact that Venice was a flourishing city. It had all the aspects of a tragedy. Venice had the good and religious people, and it also contained the road to evil and chaos. Cyprus is an island near Turkey and Greece. It is strategically very important for controlling Mediterranean trade routes. Historically it changed hands many times and is still a cause of deep argument between Turkey and Greece who both claim it is theirs. In the play, Venice controls Cyprus, but the Turks are threatening to invade, so Othello and a Venetian military force are sent to Cyprus to strengthen it from Turkish attack. Elizabethan Women were subservient to men and depended their husbands to support them. They were used to forge alliances with other powerful families through arranged marriages. They were raised to believe men were superior to them. Disobedience was seen as a crime and they could not be heirs to their father's titles. All titles would pass from father to son or brother to brother, depending on the circumstances. The only exception was the monarchy. One of the reasons why Queen Elizabeth remained unmarried was because once she was married she was expected to obey her husband and therefore she would no longer be the heir to the throne of England. Desdemona at this time is a very lucky women as many women gets beaten by their husbands. She isn't forced by Othello to do anything or strikes her. ...read more.

He enrages Othello even more by saying 'Poor and content is rich and rich enough.', telling him to be content, but knowing he will never be content after losing the love from Desdemona. Iago is now half way through his plan. 'The Moor already changes with my poison. Dangerous conceits are, in ... their natures, poisons. Which at the first are scarce found to distaste, But with a little act upon the blood. Burn like the mines of Sulphur. I did say so: Look, where he comes! Not poppy, nor mandragora, Nor all the drowsy syrups of the world, Shall evermedicine thee to that sweet sleep Which thou owedst yesterday.' Here he is saying that he never known jealously to be so strong and powerful, one that can posions peoples mind, he has suggested to the Moor that his wife is unchaste to him. 'O curse of marriage, That we can call these delicate creatures ours, And not their appetites! I had rather be a toad, And live upon the vapour of a dungeon, Than keep a corner in the thing I love For others' uses.' Here Othello is sinking deeper into jealousy. And '...a very valliant fellow...' is what people thinks of Iago now. Now beyond furious with Desdemona Othello slaps her publically while calling her a 'whore' and accusing her of infidelity. Throughout the play Othello has suspected Desdemona having an affair with Cassio after Iago posions his mind with the doubt. 'Framed to make women false.' Here Iago is saying Cassio is dashing and charming and that hes the kind of man that can persuade women from thier own husbands. And another quote is refering that Othello isn't as 'young' and 'dashing' as Cassio as he is approaching the age of 35 'I am declined Into the vale of years.' After this Desdemona's and Othello relationship have deteriorated from the beginning ith less lust between them and more rows. ...read more.

But being jealous and suspecting Othello slept with his wife isn't a worthy motive s he could have taken his revenge on his wife if he strongly believes she's been cheating on him but instead he decide to make Othello lose the most precious thing to him, his love for Desdemona, although he did killed Emillia in the end it doesnt suffrice for his motive as he killed her for betraying him and revealing the truth about the handkerchief, but not because he loath her for being a whore. In conclusion Iago is clearly a character built around jealousy and trust. By weighing up all our evidence I think he is not a motiveless malignity as he says 'Take note, take note, O world, To be direct and honest is not safe.' he is refusing to explain why he is doing all this. 'I don't have evil in me Sometimes to do me service.' and he says he is not evil, yet refuses to say why he conjured up this tradegy. I think makes people suffer because he relised that honesty will earn him nothing as he says 'I shall be ise, for honesty's a fool' and ; To be direct and honest is not safe'. Although 'evil' characters are certainly not uncommon in Shakespeare, Iago is perhaps one of the most interesting. He has been described as 'intolerable', 'an aesthete' and a 'bottomless pit' of evil, The diversity of the roles and characters he is able to play make him an interesting character to study psychologically, as well as being used by Shakespeare as a figure for hatred to be directed towards. Shakeshere portryed Iago this way is to recreate the devil incarnate. Iago personalifies the devil himself, as wicked and cunning as it says in the legends. With all this twisted anger and hatred Iago makes one of the world most famous villian throughout history and literature. This makes him a more effective villian and most importantly, a villian who is impossible to guess his next move, what he is thinking and reveal is true nature beneath his thoughts. ...read more.