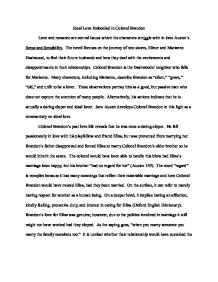 Ideal Love Embodied in Colonel Brandon Love and romance are central issues which the characters struggle with in Jane Austen's Sense and Sensibility. The novel focuses on the journey of two sisters, Elinor and Marianne Dashwood, to find their future husbands and how they deal with the excitements and disappointments in their relationships. Colonel Brandon is the Dashwoods' neighbor who falls for Marianne. Many characters, including Marianne, describe Brandon as "silent," "grave," "old," and unfit to be a lover. These observations portray him as a good, but passive man who does not capture the attention of many people. Alternatively, his actions indicate that he is actually a daring eloper and ideal lover. Jane Austen develops Colonel Brandon in this light as a commentary on ideal love. Colonel Brandon's past love life reveals that he was once a daring eloper. He fell passionately in love with his playfellow and friend Eliza, but was prevented from marrying her. Brandon's father disapproved and forced Eliza to marry Colonel Brandon's older brother so he would inherit the estate. The colonel would have been able to handle this blow had Eliza's marriage been happy, but his brother "had no regard for her" (Austen 159). The word "regard" is complex because it has many meanings that reflect their miserable marriage and how Colonel Brandon would have treated Eliza, had they been married. ...read more.

The words "silent," "grave," and "old" can all be connected to death and infirmity claiming that Brandon does not have enough spirit to persevere or fall in love again. Marianne is a very free-spirited young woman who lets her emotions guide her actions. This suggests that her view of Brandon might be an overstatement. Her mother even laughingly says, "at this rate you must be in continual terror of my decay; and it must seem to you a miracle that my life has been extended to the advanced age of forty" (50). Although her description might be slightly flawed, it does provide insight into Brandon's new style of love. The term "silent" denotes one who is quiet or cautious in conversations. This is not always a horrible trait because it allows him to think rationally and avoid making rash decisions. Another noteworthy meaning for "silent" is a man who conceals and controls his emotions (OED). Colonel Brandon quietly and patiently expresses his love in a nontraditional sense compared to Willoughby's forward flirtations. Willoughby, like Marianne, views Colonel Brandon with a strong prejudice because he is neither spirited nor youthful. Willoughby expresses his opinion of Colonel Brandon when he says that he is a man "whom every body speaks well of, and nobody cares about; whom all are delighted to see, and nobody remembers to talk to" (Austen 58). ...read more.

In the carriage ride back to the Palmers' estate, the colonel reveals his love for Marianne and opens "his whole heart" (246). Even though Mrs. Dashwood only recognizes his one good deed of fetching her, Elinor knows that this is not a spur of the moment confession because the colonel has fancied Marianne for some time. Through his marriage to Marianne, Colonel Brandon is "happy,[...] consoled for every past affliction; [Marianne's] regard and society restored [Brandon's] mind to animation, and his spirits to cheerfulness" (274). Brandon's recovers from his past afflictions, is happy, and regains his spirit when Marianne returns his love. He finds true love through patience and perseverance rather than spontaneous emotion. Colonel Brandon is an ideal lover not because he is perfect, but because he loves in a nontraditional sense and is willing to change his approach. He learned from his past emotionally charged relationship with Eliza that love is not the only thing necessary to sustain a marriage. Willoughby and Marianne symbolize the superficial, spirited, youthful, energetic, and quick to judge mindset leading them to fall in and quickly out of love. When his daring elopement fails, Brandon is willing to try another approach leading him to embody several qualities of ideal love. He exhibits courage, patience, kindness, truthfulness, and protection to the ones he loves in Sense and Sensibility. Despite his gravity and reserve, his quiet and patient love for Marianne is rewarded. ...read more.