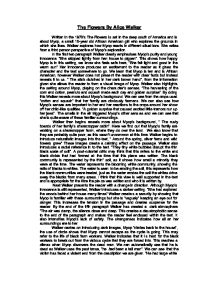 Ideas and themes in 'The Flowers' By Alice Walker

The Flowers By Alice Walker Written in the 1970's The Flowers is set in the deep south of America and is about Myop, a small 10-year old African American girl who explores the grounds in which she lives. Walker explores how Myop reacts in different situations. She writes from a third person perspective of Myop's exploration. In the first two paragraph Walker clearly emphasises Myop's purity and young innocence. "She skipped lightly from hen house to pigpen". This shows how happy Myop is in this setting, we know she feels safe here, "She felt light and good in the warm sun" Her innocence produces an excitement to the reader as it gives the character and the text somewhere to go. We learn that Myop is ten and is African American, however Walker does not present the reader with clear facts but instead reveals it to us. " The stick clutched in her dark brown hand", from the information given she allows the reader to form a visual image of Myop. ...read more.

The water represents the blooming white community, showing the ratio of blacks to whites. The water is seen to be eroding the soil, this represents how the black communities were treated, just as the water erodes the soil the whites drive away the blacks from many areas. I think that this view is well supported in the text and is appropriate for the time the piece was written and who it is written by. Next Walker presents the reader with a change in direction. Although Myop's innocence is still represented, Walker introduces a darker setting. "She had explored the woods behind her house many times" Walker creates a security by showing that Myop is familiar with these surroundings but she is "vaguely" keeping an eye out for danger. This increases the tension in the passage and creates suspense for the reader. By the end of the fifth paragraph Walker has created a dark atmosphere. "The air was damp, the silence close and deep. ...read more.

This shows that even in the toughest times there is hope. A Marxist critic might see this as a representation of the hope that many black men and women had to contain to overcome the abuse they had to take in the 1950s and 60s. The final paragraph contains only one line, this makes it stand out and is obviously important. "And the summer was over", this symbolises how Myop's childhood is over and that she has lost her innocence. Walker stresses "was" as it give the idea a clear ending, putting the events in the past. Walker produces many different ideas and themes in 'The Flowers'. She mainly focuses on the lives and treatment of black men and women at the time. I would agree with a post-colonial critic, as I feel that Walker uses the text to air her views on the treatment of black and the divide between whites and blacks. Although this could be seen as a Marxists perspective it think that it is limited and cannot be applied to the whole text. ...read more.