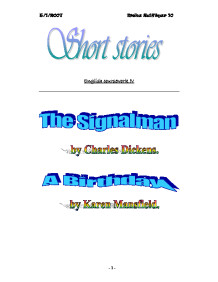 If A Birthday, and A Signalman, were compared Andreas Binzers character would be unquestionably more descriptive than that of the signalman. Karen Mansfield described everything from his teeth, attitude and nature in greater detail. Meanwh

English coursework IV Written by: Meha Zulfiqar 10 Another English coursework essay! Well, I guess I can write another few hundred words; I do want to get good grades. This time we have to write about short stories, the teacher gave us the short stories and asked us if we would like to read together in class or at home. We all chose to read in class. We only had enough time to read half at school but I decided to take a copy of the short stories home and finish reading them. On closer inspection it becomes apparent that a lot is to be learned from the dialogue of the main characters, in particular, the signalman in the short story 'The Signalman' and Andreas Binzer in 'A Birthday.' A signalman is a short story written by Charles Dickens. This is a story about a signalman who is driven "mad" by the environment of his work, away from sunlight and people. But he was not alone; a supernatural ghost decides to accompany him too. He has a lot of responsibilities to shoulder. There are only two characters that really are prominent in the short story. In fact in the story, there are only about three to five characters. The important characters are the signalman and the narrator. Charles Dickens uses dialogue to make the characters more appealing and easier to understand. He has written exactly what was need to understand the story, nothing less or nothing more. The characters are described physically briefly but Charles Dickens has described their attitude, nature, thoughts and character to a great deal. Through out 'The Signalman' the signalman's name is not mentioned which seems quite awkward. The signalman tells the narrator about his worries and still they do not ask each other their names. It seemed a little strange! The signalman was troubled but it did not seem so if a person who would have seen him for the first time and judged him by his appearance. ...read more.

A Birthday is written by Karen Mansfield. This short story is about a man, Andreas Binzer, and the way he sees himself and other people around him, but the ironic thing is that in his world he is the only that exists. Other people do not count as much as he does. I don't know whether to say fortunately or unfortunately but he has wonderful people around him. Their kindness and selflessness do not seem to affect him. Once again the details in the dialogues build up the main character with such realism. Andreas Binzer thinks he is absolutely perfect. His extremely self awareness is evident from his thoughts about his teeth, "What teeth! He thought. Sound as a bell, every man jack of them. Never had one out, never had one stopped." He thinks it took a lot of hard work and energy to make his teeth look, feel and sound perfect, "That comes of no tomfoolery in eating, and a good regular brushing night and morning." Time is something that goes and does not come back and Andreas Binzer knows this perfectly. He is a man who works with his watch, a man who has planned everything before time, "'Half-past eight, Sunday, breakfast at nine -time for the bath'- his brain ticked to the watch." He seems to be a man who notices things around him and is quick to judge and decided whether it was or is right or not, "The Venetian blind was broken.../ that blind must be mended/ ... people had a wretched habit of throwing their empty tins over the fence into the gully/... and decided, viciously, to write a letter to the papers about it and sign it." To differ from right from wrong may be really difficult for some people but not people like Andreas Binzer. If he think something is wrong it can never be right no matter who says its right. ...read more.

Suddenly as the doctor returns he feels as though his wife has died, " 'My beloved wife has passed away!" But instead it was good news, " 'Well, she's hooked a boy this time!" All Andreas Binzer says is, " 'Well, by God! Nobody can accuse me of not knowing what suffering is." Andreas Binzer literally killed his wife in his thoughts and called this suffering. Suffering for him was thinking for a few minutes. Andreas Binzer could have been such a character because 'A Birthday' was written by a woman. Some women tend to see men in a negative light as, selfish, self-centered and arrogant. Andreas Binzer may not have been portrayed so pessimistically if maybe, he had been written by a man. He would have been an extremely attractive man, totally devoted to his family with an outstanding paying job and the story would have been written to show how women are lucky to have men on their side and how thankful women should be to God for creating Men. In view of the fact that this short story is written by a woman it seems to be more descriptive. If 'A Birthday,' and 'A Signalman,' were compared Andreas Binzer's character would be unquestionably more descriptive than that of the signalman. Karen Mansfield described everything from his teeth, attitude and nature in greater detail. Meanwhile, Charles Dickens just wrote what was needed exactly. The way people see each other seems to differ so drastically. In one short story you try to understand a person's problems and situation whereas, the other shows how inconsiderate a person can be and still be blessed with great people around them. I spent a long time writing this essay and I believe that if I take the time I would really show what people are like. It amazed me how realistic the characters in these short stories are and that many people like those can be found in the world. Written by; Meha Zulfiqar. Year 10 4404 words. ?? ?? ?? ?? 5/1/2007 Meha Zulfiqar 10 - 1 - ...read more.