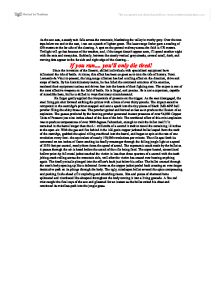 As the sun sets, a steady rain falls across the mountain, blanketing the valley in murky grey. Over the tree tops below me and to the east, i can see a patch of lighter green. The laser range finder gave a reading of 630 meters to the far side of the clearing. A spot on the ground midway across the field is 576 meters. Twilight will go fast because of the weather, and, if the target doesn't appear soon, i'll spend another night with the ants and mosquitos. Suddenly, between the steady vertical grey streaks, several small, dark, and moving dots appear to the far side and right edge of the clearing.... ...read more.

As the sear disengaged, the steel firing pin shot forward striking the primer with a force of over thirty pounds. The impact sensitive compound in the cartridge's primer snapped and sent a spark into the tiny pieces of black IMR 4895 ball powder filling the shiny brass case. The powder ignited and burned so fast as to produce the illusion of an explosion. The gasses produced by the burning powder generated instant pressures of over 54,000 Copper Units of Pressure just nine inches ahead of the face of the bolt. The combined effect of this mini-explosion was to produce temperatures of over 3000 degrees Fahrenheit, enough to melt the bullet itself if it remained in the barrel longer than the 6.1 millionths of a second it took to travel the remaining 18 inches to the open air. ...read more.

The deadly missile plunged into the officer's back just below his collar. The bullet coursed through the man's body opening up like a deformed flower as the copper jacket peeled back creating an ever-larger destructive path on its plunge through the body. The ugly, misshapen bullet severed the spine compressing and pushing fluids ahead of it exploding and shredding tissue. Bits and pieces of shattered bone splintered and ricocheted like shrapnel throughout the body turning it into a living grenade. A fine red mist caught the final rays of the sun and glistened for an instant as the bullet exited his chest and continued its mindless path into the jungle grass. ...read more.