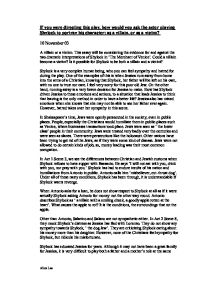 If you were directing this play, how would you ask the actor playing Shylock to portray his character: as a villain, or as a victim?

If you were directing this play, how would you ask the actor playing Shylock to portray his character: as a villain, or as a victim? 10 November 03 A villain or a victim. This essay will be considering the evidence for and against the two dramatic interpretations of Shylock in 'The Merchant of Venice'. Could a villain become a victim? Is it possible for Shylock to be both a villain and a victim? Shylock is a very complex human being, who you can feel sympathy and hatred for during the play. One of the examples of this is when Jessica runs away from home into the arms of a Christian, knowing that Shylock, her father will be left on his own, with no one to trust nor care. I feel very sorry for this poor old Jew. On the other hand, running away is a very brave decision for Jessica to make. How has Shylock driven Jessica to these emotions and actions, to a situation that leads Jessica to think that leaving is the only method in order to have a better life? Jessica also has mixed emotions when she knows that she may not be able to see her father ever again. ...read more.

In Act 4 in the Duke's palace, the Duke shows sympathy towards Antonio, he says' I am sorry for thee', which suggests that the Duke is on the Christian's side, so how is this judgement fair? Secondly, when Portia releases Antonio from the bond, she is not satisfied, she wants revenge, she heaps financial penalties and humiliation on Shylock. Worst of all, they make Shylock agree to change to a Christian. Religion is spiritual. Nobody has the right to convert anyone's religion, as this is a part of our soul. On the other hand, Shylock is prejudiced when he says 'I hate him for he is a Christian'. He is just as insulting back, being prejudiced towards any Christian in sight. He wanted a pound of flesh as a payment from Antonio. In other words, Shylock wants to kill Antonio, and he wants to get rid of him. A pound of flesh is far too extreme as a payment. It is understandable if Shylock uses this chance for revenge, but there are many other ways. However, he chooses the cruellest way. Shylock calls it 'a merry bond', as if killing were just a game for him after all. ...read more.

In Shylock's famous speech in Act 3 Scene 1, the actor could express his pain, in order to gain the audiences' pity. Jewish people have been persecuted for centuries, treated unfairly in societies. There is no exception in Venice and Belmont. Because of the unfairness of the community, anyone, even the kindest heart would be hardened. Shylock has always known the cruelty this society has towards the Jews. Being brought up in the country has made Shylock a cold blooded person, who is always wanting revenge. This is natural, whereas forgiving seems to be unnatural for human beings. Having said this, Christians should be more aware of this forgiveness as they are told to forgive in their bible. The Christians in 'The Merchant Of Venice' are not good examples of their religion either. Should not a Christian take Jesus as their guideline in every day's life, and so persecuting, criticising and humiliating an example of Jesus? Shylock never does anything would harm anyone, so why does Antonio see Shylock as his 'enemy'? Shylock is mean, but after this humiliation and persecution, who can blame Shylock of being cruel? He is just trying to defend himself, by hurting others before being hurt. ?? ?? ?? ?? Alice Lee ...read more.