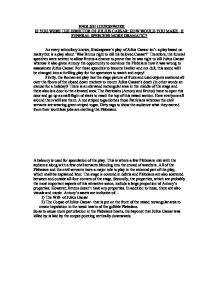 IF YOU WERE THE DIRECTOR OF JULIUS CAESAR; HOW WOULD YOU MAKE THE FUNERAL SPEECHES MORE DRAMATIC?

ENGLISH COURSEWORK IF YOU WERE THE DIRECTOR OF JULIUS CAESAR; HOW WOULD YOU MAKE E FUNERAL SPEECHES MORE DRAMATIC? As every schoolboy knows, Shakespeare's play of Julius Caesar isn't a play based on reality but is a play about 'Was Brutus right to kill his beloved Caesar?' Therefore, the funeral speeches were written to allow Brutus a chance to prove that he was right to kill Julius Caesar whereas it also gives Antony the opportunity to convince the Plebeians how it was wrong to assassinate Julius Caesar. For these speeches to become livelier and not dull, this scene will be changed into a thrilling play for the spectators to watch and enjoy! Firstly, the Roman-set play has the stage picture of fruits and used objects scattered all over the floors of the closed down markets to mourn Julius Caesar's death (in other words an excuse for a holiday)! There is an elevated rectangular area in the middle of the stage and there also is a door to the elevated area. The Patricians (Antony and Brutus) have to open this door and go up a small flight of stairs to reach the top of this raised section. Here everyone all around them will see them. A red striped toga clothes these Patricians whereas the civil servants are wearing green striped togas. Dirty rags to show the audience what they earned from their worthless jobs are clothing the Plebeians. ...read more.

So as you can see from the above, colour is the outline of drama, as you can't have drama without colour. When the light is placed over the corpse, this shows hyperbole on the corpse of Julius Caesar, as it is not a traditional act to hang up a corpse just to cause the spectators to become emotional. As Brutus is reciting the second line of his speech, "Romans, countrymen and lovers!" The words they were addressed with murmurs of "us" excite the Plebeians and "he's a good man!" Are heard whispering in the background. Then he gets to the part where he explains how he loved Caesar-here a homosexual Plebeian shouts from among the audience "I love u too." Furthermore Brutus uses rhetorical questions such as "...to live all free men?" and "Who is here so base that would be a bondman?" After many rhetorical questions, Brutus pauses to make the scene more dramatic. After the corps is put in its body is in a suitable position where Brutus cannot see it so he does not have to see its significance because he doesn't know its there. Brutus is now departed and Antony can say whatever he wishes. The light above Caesar is presently shining all over Caesar and is also the cause for the long occurring stares from the Plebeians. At this stage, Brutus has finished pronouncing his mistakes-which include ordering Plebeians to listen to Antony and telling them he gave Antony permission to speak. ...read more.

Now he is on the verge of losing what he worked for with all the Plebeians ( along with the audience) shouting for the Will to be read. This is the first time in the whole scene that the main character is overtaken by all the noise around that no-one can hear his orders of "Fellow mourners- please listen to me," or "Gentles stop, I order you." Later on from this, Antony understates himself by saying "I am no orator..."I have no speech or tongue or wit to move men's hearts..." and also saying "a plain blunt man..." Antony uses the word 'stones' to describe the Plebeians as stones have no brains but are very strong and solid. The comparison made between stones and Plebeians is a very precise comparison but the only difference is that it is easier for stones to be stupid as they have no hearts- making the Plebeians very stupid when compared with stones. Finally, the last thing he uses is a rhetorical device (question) to leave that hanging in their minds, as normally the part of a speech you remember most is that part- so Antony cleverly finishes off with a rhetorical question at their leisure. When Antony leaves the elevated area and watches the Plebeians destroy everything- he reveals his true plan is working and his motive WAS to cause mischief throughout Rome in the first place! ?? ?? ?? ?? ...read more.