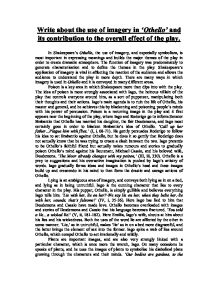 Write about the use of imagery in 'Othello' and its contribution to the overall effect of the play. In Shakespeare's Othello, the use of imagery, and especially symbolism, is most important in expressing meanings and builds the major themes of the play in order to create dramatic atmosphere. The function of imagery was predominately to generate characterisation and to define the themes in the play. Shakespeare's application of imagery is vital in affecting the reaction of the audience and allows the audience to understand the play in more depth. There are many ways in which imagery is used in Othello and it is conveyed in many different areas. Poison is a key area in which Shakespeare more than dips into with the play. The idea of poison is most strongly associated with Iago, the heinous villain of the play that controls everyone around him, as a sort of puppeteer, manipulating both their thoughts and their actions. ...read more.

'The Moor already changes with my poison,' (III, iii, 330). Othello is a prey to suggestions and his overactive imagination is pushed by Iago's artistry of words. Iago gradually forms ideas and images in Othello's head and these images build up and crescendo in his mind to then form the drastic and savage actions of Othello. Lying is an ambiguous area of imagery, and conveys both lying as in on a bed, and lying as in being untruthful. Iago is the cunning character that lies to every character in the play. His puppet, Othello, is simply gullible and believes everything Iago tells him. 'Lie with her, lie on her?-We say lie on her, when they belie her,-lie with her, zounds, that's fulsome!' (IV, i, 35-36). Here Iago has lied to him that Desdemona and Cassio have made love. ...read more.

The characters of the play are controlled by natural forces, which are part of their personality, and are capable of growing wild. Iago is the character that comprehends these natural forces and is literally the gardener of the play, who can do what he wants with the plants. Iago sees other characters' minds as fertile soil, in which he can sow his seeds of evil and grow them using his lies and rumours into wild and untamed plants, and Othello seems to be most vulnerable to Iago's gardening skills. The organic manner in which Iago's schemes devour the other characters and control their behaviour makes his wickedness seem more like forces of nature, as if unstoppable to anything and anyone. Animals are yet another group of strong images in the play and are used to draw out the personalities of various characters. Indeed it is the libertine, Iago, who speaks of animals and creatures more than any other character in the play. ...read more.

This essay engages with the question superbly, picking out key pieces of imagery used by Shakespeare. However, there is a lack of discussion of the audience's response to these images. Being a play, I would've liked more awareness of an ...

This essay engages with the question superbly, picking out key pieces of imagery used by Shakespeare. However, there is a lack of discussion of the audience's response to these images. Being a play, I would've liked more awareness of an audience's reaction to the imagery being used on stage - such analysis would've gained higher marks!

The analysis is sound in this essay. Rather than spotting random uses of imagery, the essay is able to find common themes used by Shakespeare. By doing this, the essay becomes structured and focused, whilst allowing a natural progression into the reasons for Shakespeare choosing the imagery. It was a shame to see the line references included with quotes, as these are unnecessary and break up the flow. However, once a quote has been embedded, the essay tends to talk about the effect on the plot and characters. In my opinion, this can easily be tweaked to discuss the dramatic influence on the audience, but this must be changed to get top marks. You can't get away with talking about the characters as if they make the choices - Shakespeare creates the semantic field of poison to affect the audience, not Othello, for example. To show this awareness, phrases such as "Shakespeare has Iago" or "Shakespeare uses poisonous imagery to" will suffice.

This essay is structured well, with a clear introduction and conclusion. In the introduction, I'd rather they briefly summarise the imagery used rather than saying "a number of ways". I liked how each paragraph starts with a short and concise signpost, making it clear what the paragraph will add. The style is very sophisticated, with spelling, punctuation and grammar being used well.