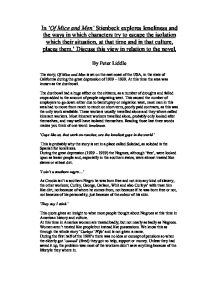 In Of Mice and Men(TM) Stienbeck explores loneliness and the ways in which characters try to escape the isolation which their situation, at that time and in that culture, places them.(TM) Discuss this view in relation to the

In 'Of Mice and Men' Stienbeck explores loneliness and the ways in which characters try to escape the isolation which their situation, at that time and in that culture, places them.' Discuss this view in relation to the novel. By Peter Liddle The story; Of Mice and Men is set on the east coast of the USA, in the state of California during the great depression of 1929 - 1939. At this time the area was known as the dust bowl. The dust bowl had a huge affect on the citizens, as a number of droughts and failed crops added to the amount of people migrating west. This caused the number of employers to go down either due to bankruptcy or migration west, most men in this area had to move from ranch to ranch on short-term, poorly paid contracts, as this was the only work available. These workers usually travelled alone and they where called itinerant workers. Most itinerant workers travelled alone, probably only looked after themselves, and may well have isolated themselves. Reading those last three words makes you think of one word: loneliness. 'Guys like us, that work on ranches, are the loneliest guys in the world' This is probably why the story is set in a place called Soledad, as soledad is the Spanish for loneliness. ...read more.

'...what am I doin'? Standin' here talking to a bunch of bindle stiffs...an' likin' it because they ain't nobody else.' The setting of the novel in the great depression (1929 - 1939) contributes to Crooks's situation as it is 70 years after the abolishment of slavery but at this time the Negroes were still treated like dirt in California, and the attitudes of the workers reflect the attitudes of the majority of people in America at this time. Like women were treated as possessions so were black people In a way the situations of Curley's wife and Crooks are similar, but then Stienbeck starts to show you that Crooks is treated much worse as the opinions of the men go past name calling and they completely isolate Crooks, and even Curley's wife treats Crooks like he is less important than her. 'She turned to him in scorn. 'Listen, Nigger,' Curley and the workers picks on Curley's wife so she picks on Crooks so then Crooks picks on Lennie. Lennie doesn't pick on anyone because he doesn't need to pick on anyone, as he is perfectly happy because he has George. This shows that Crooks is completely isolated, when Lennie goes into Crooks's room he is absolutely overjoyed but Crooks has to hide ...read more.

In the future some characters will get lonelier, like George who is becoming the very thing he has been so different from his entire time with Lennie, George will, '...work my month an' I'll take my fifty bucks an' I'll stay all night in some lousy cat house.' 'An' then I'll come back an' work another month an' I'll have fifty bucks more.' Curley will get lonelier, even if only temporarily, because now his wife is dead he will have no one to talk to, except his farther, as none of the workers like him as he is always mean, callous and nasty to them. Candy will also get lonelier as he will inevitably get canned and he will have nowhere to go now that the 'dream' is shattered. Crooks will not get lonelier or less lonely but stay sort of the same, although I don't think he could get any lonelier than he already is, unless Slim and the boss stopped talking or interacting with him. The other workers on the ranch will slowly get less lonely as time goes on because they will become closer and closer friends with each other. However they will all probably move on and stay lonely. ...read more.