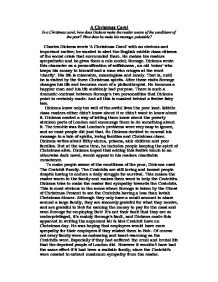 In a Christmas carol, how does Dickens make the reader aware of the conditions of the poor? How does he make his message palatable?

A Christmas Carol In a Christmas carol, how does Dickens make the reader aware of the conditions of the poor? How does he make his message palatable? Charles Dickens wrote 'A Christmas Carol' with an obvious and important motive; he wanted to alert the English middle class citizens of the social crisis that surrounded them. He makes his readers sympathetic and he gives them a role model; Scrooge. Dickens wrote this character as a personification of selfishness, an old 'miser' who keeps his money to himself and a man who cringes at the word 'charity'. His life is miserable, meaningless and lonely. That is, until he is visited by the three Christmas spirits. After these visits Scrooge changes his life and becomes more of a philanthropist. He becomes a happier man and his life suddenly had purpose. There is such a dramatic contrast between Scrooge's two personalities that Dickens point in certainly made. And all this is masked behind a festive fairy tale. Dickens knew only too well of the awful lives the poor lead. Middle class readers either didn't know about it or didn't want to know about it. Dickens needed a way of letting them know about the poverty stricken parts of London and encourage them to do something about it. ...read more.

The character that evokes the most sympathy is Tim, Christened 'Tiny Tim' due to his crippled frame and his waning health. He doesn't complain, protest or pity himself, he even sees the positive in being crippled because we hear Bob Cratchit telling his wife '"He told me, coming home, that he hoped people saw him in the church, because he was a cripple, and it might be pleasant to remember upon Christmas Day, who made lame beggars walk and blind men see."' It is quotes like this that make you grow fond of Tiny Tim which makes it even more heartrending when Scrooge is shown the scenes where Tiny Tim has passed away. What makes the situation more frustrating is the reality that Scrooge could have saved Tiny Tim's life if he had only been more charitable. Scrooge now cares about what happens to the unfortunate because when his words from page 8 '"If they had rather die,' they better do it and decrease the surplus population"' are quoted back to him by the Spirit on page 52, Scrooge feels mortified that he'd ever thought that way. We can tell this because it says '"Scrooge hung his head to hear his own words quoted by the spirit, and was overcome with penitence and grief."' ...read more.

At the end of Stave Three the Ghost of Christmas Present shows Scrooge two children claiming the boy to be Ignorance and the girl to be Want. His purpose was to shock Scrooge by showing him how doomed the poor were. The Ghost begs Scrooge to help the poor before it's too late and he actually gets heated at Scrooge, '"Are there no prisons?" said the Spirit, turning on him for the last time with Scrooges own words. "Are there no workhouses?"' The moral of 'A Christmas Carol' is concluded perfectly by Jacob Marley's quote on page 18, '"Business!" cried the Ghost, wringing his hands again "Mankind was my business; charity, mercy, forbearance, and benevolence, were, all, my business."' Ultimately, Dickens uses Scrooge and his experiences with the different ghosts as a way of educating the upper class about the conditions of the poor. Dickens was cunning to get his message across so subtly, so much so that the reader doesn't even know that they're being taught anything because they're being entertained at the same time. At the end of the book we see that Scrooge has become a benefactor, we know that he is happier this way from the quote on page 87, '"His own heart laughed: and that was quite enough for him."' Dickens hopes that the reader changes for the better after seeing how elated Scrooge is after he becomes a philanthropist. ...read more.