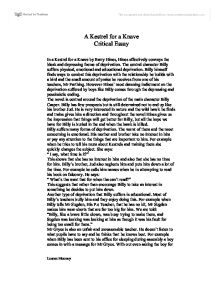 In a Kestrel for a Knave by Barry Hines, Hines effectively conveys the bleak and depressing theme of deprivation. The central character Billy suffers physical, emotional and educational deprivation.

A Kestrel for a Knave Critical Essay In a Kestrel for a Knave by Barry Hines, Hines effectively conveys the bleak and depressing theme of deprivation. The central character Billy suffers physical, emotional and educational deprivation. Billy himself finds ways to combat this deprivation with the relationship he builds with a bird and the small amount of praise he receives from one of his teachers, Mr Farthing. However Hines' most damning indictment on the deprivation suffered by boys like Billy comes through the depressing and pessimistic ending. The novel is centred around the deprivation of the main character Billy Casper. Billy has few prospects but is still determined not to end up like his brother Jud. He is very interested in nature and the wild hawk he finds and trains gives him a direction and throughout the novel Hines gives us the impression that things will get better for Billy, but all the hope we have for Billy is buried in the end when the hawk is killed. Billy suffers many forms of deprivation. The worst of them and the most concerning is emotional. His mother and brother take no interest in him or pay any attention to the things that are important to him. ...read more.

An example of this would be that he is very skinny due to the lack of decent food. His mother doesn't have time to cook him one so she tells him to go get it himself. She says: "Here, theres two bob for you. Go and buy yourself some pop an' some crisps or summat" This shows that she expects Billy to get his own food or go the day with the amount of money she gives him. Another example that shows Billy is physically deprived is the fact that he doesn't own a P.e kit. When he is told to get changed he says: "I've no kit, Sir." This makes his teacher think even less of him so it is much easier for them to bully him. The Fact that Billy has no kit suggests that his mum doesn't bother about buying the clothes he needs. One of the ways Billy combats this deprivation is through he relationship he builds with a hawk. Billy cares for and respects the hawk more than anything else and in return the bird respects him as well. For example he says: "Do you know, Sir, I feel as though shes doin' me a favour just letting me stand here." ...read more.

This shows that he is gymnastic but his teacher shouts at him instead of telling him how good he is. Another example of how Billy is a survivor is how patient and determined to train the hawk he is. He even steals a book on falconry because he is refused one at the library. Billy is also good with other animals for example, Mr Farthing asks if he has had any other pets before and he replies: "Stacks. I had a young fox cub once, reared it an' let it go. It wa' a little blinder." This suggests that if Billy is motivated then he could go on to do something to do with wildlife as a career. The message Hines puts across throughout the novel is that boys like Billy who are deprived can't change the fact that they have a very bleak future. At the end of the novel when Billy buries the hawk, it suggests that he is burying his hope and his chance of breaking through deprivation. Barry Hines' depiction of a young boys fight for survival in a world, which seems to care little about him, is often touching. Overall, however, it leaves us in doubt that deprivation destroys self-respect, determination and ultimately the most important thing that everybody needs to survive - hope. Lauren Mooney ...read more.