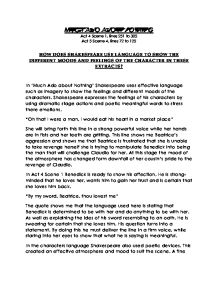 In Much Ado about Nothing Shakespeare uses effective language such as imagery to show the feelings and different moods of the characters. Shakespeare expresses the feelings of his characters by using dramatic stage actions and poetic meaningful word

MUCH ADO ABOUT NOTHING Act 4 Scene 1, lines 251 to 305 Act 5 Scene 4, lines 72 to 125 HOW DOES SHAKESPEARE USE LANGUAGE TO SHOW THE DIFFERENT MOODS AND FEELINGS OF THE CHARACTER IN THESE EXTRACTS? In 'Much Ado about Nothing' Shakespeare uses effective language such as imagery to show the feelings and different moods of the characters. Shakespeare expresses the feelings of his characters by using dramatic stage actions and poetic meaningful words to stress there emotions. "Oh that I were a man, I would eat his heart in a market place" She will bring forth this line in a strong powerful voice while her hands are in fists and her teeth are gritting. This line shows me Beatrice's aggression and shows me that Beatrice is frustrated that she is unable to take revenge herself she is trying to manipulate Benedick into being the man that will challenge Claudio for her. ...read more.

In the characters language Shakespeare also used poetic devices. This created an effective atmosphere and mood to suit the scene. A fine example is when Beatrice and Benedick are finally left alone on stage near to the end of Act 4 Scene 1. This part of the scene was the only private time Benedick and Beatrice had. In this scene each character had changed emotionally and physically as they have let there (feelings) guard down. "Lady Beatrice, have you wept all this while?" Beatrice is grieving over her cousins, so Benedick is trying to comfort her and support her. The quote shows me that he appears to be a gentleman, by calling her lady makes him seem more light hearted then he really is and shows how much more respect he has for her. ...read more.

This shows that she is unable to admit or show her feelings in front of people. And that she has changed he mind on the matter of love such as Benedick. "Peace I will stop your mouth (kissing her)" This indicates that Benedick is finally willing to show his affection in public and just wants her to be quite. He will deliver this line in a strong manly voice whilst grabbing her waist. But he knows that his friends are going to remind him of what he said about being a bachelor and never getting married. The atmosphere and mood in Act 4 Scene 1 and Act 5 Scene 4 are complete difference in atmosphere. Act 4 Scene 1 has more humiliation and revenge as to Act 5 Scene 4 is more lighthearted and more love, marriage in the atmosphere. There is a joyous conclusion which Shakespeare always has. ...read more.