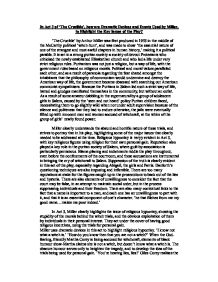 In Act 3 of 'The Crucible', how are Dramatic Devices and Events Used by Miller, to Highlightv,ljfkf

In Act 3 of 'The Crucible', how are Dramatic Devices and Events Used by Miller, to Highlight the Key Issues of the Play? 'The Crucible' by Arthur Miller was first produced in 1953 in the middle of the McCarthy political 'witch-hunt', and was made to show 'the essential nature of one of the strangest and most awful chapters in human history,' making it a political parable. It is set in a strong puritan society-a society of devout Protestants who criticised the newly established Elizabethan church and who led a life under very strict religious rules. Puritanism was not just a religion, but a way of life, with the government rules based on religious morals. Political and moral values paralleled each other, and as a result of paranoia regarding the fear shared amongst the inhabitants that the philosophy of communism would undermine and destroy the American way of life, the government became obsessed with searching out American communist sympathisers. Because the Puritans in Salem led such a strict way of life, hatred and grudges manifested themselves in the community, but without an outlet. As a result of some amateur dabbling in the supernatural by a group of adolescent girls in Salem, caused by the 'seen and not heard' policy Puritan children faced, necessitating them to go slightly wild when not under adult supervision because of the silence and politeness that they had to endure otherwise, the jails were eventually filled up with innocent men and women accused of witchcraft, at the whim of the group of girls' newly found power. Miller clearly understands the absurd and horrific nature of these trials, and strives to portray that in his play, highlighting some of the major issues that clearly needed to be addressed at the time. ...read more.

Blame and accusations are important in this play, because it is on blame alone that victims are accused and sentenced, and on which the whole court system relies. Even before the confines of the courtroom, there is a chorus of indictments that set the scene for the hysteria of the witch trials. The entire with trial system relies on and thrives from accusations and blame-blame is the only way that witches can be identified and executed. The justice of the court is based on individuals blaming each other. 'We must rely upon her victims' As Danforth says, the sole evidence that the court uses to arrest the innocent townsfolk of Salem is the 'victim's' testimony, and whoever they care to blame. The stage directions that Miller uses of the apparitions of the wind and the yellow bird are used by Abigail and the girls as diversionary tactics to shift the focus and blame to Mary, who is trying to speak against them, who in turn, uses it to blame Proctor. As usual, this is the only evidence needed by the court to arrest Proctor for being a witch-just the sole verbal blame from one little girl, which has the power to throw someone in jail with a death sentence. 'He's come to overthrow this court...this is a clear attack upon the court'. Throughout this act Parris is blaming Proctor for an attack on the court, and for an attempt to undermine it. The dramatic device used here is the accusatory delivery of his lines throughout the act. He is trying his utmost to sway Judge Danforth and to throw Proctor off course, but is eventually silenced. ...read more.

that which not enriches him, and makes me poor indeed' This quote form the play 'Othello' by Shakespeare shows that a name is important to a man, more important than his money or possessions. 'I quit this court!' The stage direction of Hale slamming the door after quitting the court from which he was part of, ruins his good name and relinquishes the power he held, because he realises the injustice and lies that are holding the court up. 'Their bodies are buried in peace, but their name shall liveth for evermore.' This quote from the bible, of St Matthew, Chapter 44, verse 9 says that if someone is dead, but has not left a name behind them, it means that they have not sinned and their name shall live on forever. Giles acted upon the same principle in this act-'I cannot give you his name.' Giles refuses to name someone else just so he can keep his own life, and dies for the cause. Proctor in this act also does not defile his name, because he does not confess to witchcraft when prompted, so is thrown in jail with a death sentence. He instead speaks the truth-that Salem has 'pulled down heaven and raised up a whore.' In conclusion, in Act 3 of the crucible, Miller uses dramatic devices and events to highlight the key issues of the play, and, indeed, of the time, highlighting the problems and issues with Puritanism and the way of life in those days, and highlights the paranoia and hysteria that flourished in Salem at the time. He realises the irony of the trials, that they were supposed to be God's will, but people were in fact using religion to their own ends. By Luke Worley (9T) 2915 words. ...read more.