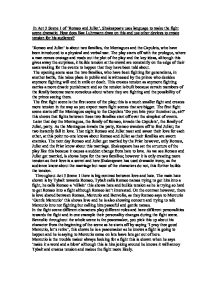 In Act 3 Scene 1 of 'Romeo and Juliet', Shakespeare uses language to make the fight scene dramatic. How does Baz Luhrmann draw on this and use other devices to create tension for his audience?

In Act 3 Scene 1 of 'Romeo and Juliet', Shakespeare uses language to make the fight scene dramatic. How does Baz Luhrmann draw on this and use other devices to create tension for his audience? 'Romeo and Juliet' is about two families, the Montagues and the Capulets, who have been introduced to a physical and verbal war. The play starts off with the prologue, where a man comes onstage and reads out the plot of the play and the key ideas, although this gives away the surprises, it builds tension at the crowd are constantly on the edge of their seats waiting for the events to happen that they have been told about. The opening scene sees the two families, who have been fighting for generations, in another battle, this takes place in public and is witnessed by the prince who decides anymore fighting will end in exile or death. This creates tension as anymore fighting carries a more drastic punishment and so the tension is built because certain members of the family become more conscious about where they are fighting and the possibility of the prince seeing them. The first fight scene is the first scene of the play; this is a much smaller fight and creates more tension in the way as you expect more fight scenes that are bigger. The first fight scene starts off the Montagues saying to the Capulets 'Do you bite your thumb at us, sir?' this shows that fights between these two families start off over the simplest of events. Later that day the Montagues, the family of Romeo, invade the Capulets', the family of Juliet, party. ...read more.

Benvolio can see things are getting heated and tries to move them into a private place where the prince won't be able to see by saying 'withdraw into some private place', however Mercutio just replies saying 'Men's eyes were made to look' This creates tension as Benvolio is getting more and more worried about the prince seeing and Mercutio not caring. Tybalt then tells Mercutio he no longer wants a fight with him, he wants one with Romeo who has just entered the scene, Romeo has just come from his wedding and is in a good peaceful mood after marrying the women he loves and just wants peace. Tybalt starts by calling Romeo 'a villain'. Romeo responds to this calmly, and drops a hint that he is part of Tybalts family, and says he is not a villain. Tybalt responds by calling him 'boy' and saying Romeo has caused him injuries. This is creating tension as Romeo is part of Tybalts family now and doesn't want to get drawn into a fight; however Tybalt is unaware of Romeo's marriage and still sees him as a Montague who invaded his families party. Romeo responds to Tybalt claiming he has never caused any injuries to Tybalt and says 'And so good Capulet, which name I tender as dearly as my own'. This is Romeo dropping another hint that he is now part of the family and builds more tension between the two. Mercutio then joins in by calling Tybalt 'rat-catcher'. Shakespeare has put different types of names to each character depending the personality of that character, this creates tension as insults are flying around with a lot of anger which is pushing closer and closer to a fight. ...read more.

As fighting takes place the sky becomes brighter but darkens again when Mercutio is stabbed, at the end it is dark and there are shadows over Mercutio's body showing his soul going to heaven. For the setting/scenery it is a hot and humid day this builds tension as the heat makes the characters far more agitated than usual. The starts off on the beach in an open area where there are lots of people focusing their attention on these characters. As the fight starts lots of onlookers flee in the terror. As Mercutio, Tybalt and Romeo get caught in a fight they move towards an open stage arena. Later as Mercutio is stabbed he stumbles up onto the stage and begins to say 'ay, ay, a scratch, a scratch' this is effective as he is acting about his wound and he is acting on the stage. The costumes are a complete contrast of one another the Montagues are wearing bright and colourful clothing showing they just want fun. However, the Capulets are in black, this shows they want death and shows their evil. Mercutio is wearing white so it emphasizes the blood stains from where he has been stabbed. Finally when Romeo arrives he is wearing a suit which is very formal this shows he has just been somewhere important and is not looking for a fight. In this scene there is a low amount of props which then shows that all the attention is drawn to the characters. One of the props the life guard post, this is shown at the start when Benvolio is sitting in it, this is to show he is above the rest and he is respected as he looks like a figure of authority. On each characters guns they have crests of their families, this emphasizes their wealth and power. ...read more.

Some good points made about both the text and the film but not enough contrast of the two or consideration of how Luhrmann has used Shakespeare's language and stage directions to create his own production.