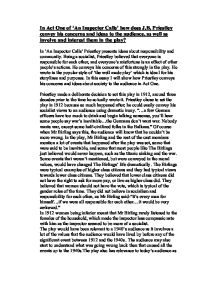 In Act One of 'An Inspector Calls' how does J.B. Priestley convey his concerns and ideas to the audience, as well as involve and interest them in the play?

In Act One of 'An Inspector Calls' how does J.B. Priestley convey his concerns and ideas to the audience, as well as involve and interest them in the play? In 'An Inspector Calls' Priestley presents ideas about responsibility and community. Being a socialist, Priestley believed that everyone is responsible for each other, and everyone's misfortune is an effect of other people's actions. He conveys his concerns of this strongly in the play. He wrote in the popular style of 'the well made play' which is ideal for his storylines and purposes. In this essay I will show how Priestley conveys his concerns and ideas about society to the audience in Act One. Priestley made a deliberate decision to set this play in 1912, around three decades prior to the time he actually wrote it. Priestley chose to set the play in 1912 because so much happened after; he could easily convey his socialist views to an audience using dramatic irony. "...a few German officers have too much to drink and begin talking nonsense, you'll hear some people say war's inevitable...the Germans don't want war. Nobody wants war, except some half-civilized folks in the Balkans." Of course when Mr Birling says this, the audience will know that he couldn't be more wrong. In the play, Mr Birling and the rest of the cast members mention a lot of events that happened after the play was set, some that ...read more.

One of the main problems with this is that in each flashback, you see Eva Smith, but you see the same girl each time, which makes the ending idea that it isn't the same girl impossible. Most of the characters are The Birlings family and people connected with them, which means the characters are mainly upper class. The only lower class characters are Eva Smith and Edna the maid. Mr Birling tries to stay in charge as he is the oldest, and is male, but he loses his authority over Sheila and Eric as they could see what was going to happen and Mr and Mrs Birling couldn't. Mr Birling tries to keep his authority by siding with Gerald as he would be the second most powerful in the household and shares Mr Birling's views. Unfortunately for him that was not enough for him to keep his authority. Things are not as perfect as they seem because The Birlings just want to appear perfect to everyone else. Sheila didn't feel properly engaged until she had the ring, so she obviously was slightly unsure about her relationship with Gerald. The Inspector is a useful dramatic device for Priestley because the Inspectors views in the play are the same as Priestley's (socialistic), so Priestley uses the Inspector to help convey his own concerns and ideas about the class system to The Birling family, who represent the old fashioned views and values of a lot of the general public at the time. ...read more.

In conclusion Priestley uses dramatic devices in Act One to influence the audience with his view, so they see how a small meaningless action that they do, may destroy someone else's life. Priestley interests and involves the audience in the play by giving it a good storyline, and using dramatic irony with the events after the play was set, so the audience feel like they know something that the characters don't, so the audience know whats going to happen, or at least try to guess. At the beginning of Act One, the audience think that the Birlings are perfect, which is just what the Birlings try to do, but by the end of Act One, the audience starts to realise that it is really all an act. Priestley's message was that we are all part of one community. We are all responsible for each other, and our actions may affect someone else's life. He wanted to show how social status may lead to exploitation and hypocrisy. Being a socialist, Priestley believed there is a collective responsibility for each other, even if some people don't feel guilty about something until they know how it really affected someone else. He also believed that the class system and gender roles were wrong at that time. But after the war things changed as everybody had to pull together to do what they could. This is still apparent today, as the class system is less apparent and less important, and the gender roles are completely different, women are no longer inferior. ...read more.