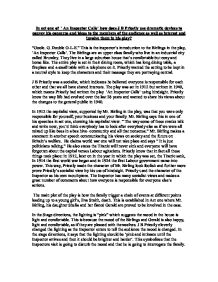 In act one of ' An Inspector Calls' how does J B Priestly use dramatic devices to convey his concerns and ideas to the members of the audience as well as interest and involve them in his play? "Goole. G. Double O-L-E." This is the inspector's introduction to the Birlings in the play, 'An Inspector Calls'. The Birlings are an upper class family who live in an industrial city called Brumley. They live in a large suburban house that's comfortable but cozy and home like. The entire play is set in their dining room, which has long dining table, a fireplace and a small table with a telephone on it. Priestly wanted the setting to be kept in a neutral style to keep the characters and their message they are portraying central. J B Priestly was a socialist, which indicates he believed everyone is responsible for each other and that we all have shared interests. The play was set in 1912 but written in 1940, which means Priestly had written the play 'An Inspector Calls' using hindsight. Priestly knew the way life had evolved over the last 28 years and wanted to share his views about the changes to the general public in 1940. In 1912 the capitalist view, supported by Mr. Birling in the play, was that you were only responsible for yourself, your business and your family. Mr. ...read more.

Mr. Birling was in full flow of one of his many capitalist speeches in act one, when the sound of the doorbell pierces through the house, and the Inspector has arrived. The stage directions say, 'we hear the sharp ring of the front doorbell. Birling stops to listen.' Eric then continues, "Somebody's at the front door". After a few moments of talking Edna, the housekeeper, enters with the Inspector, saying "Please sir, an Inspectors called". The arrival of the inspector is of course significant, because firstly, the Inspector breaks off Mr. Birlings speech about how "you are only responsible for yours, your own and your business" and about "... community and all that nonsense." When the Inspectors sole purpose in the play is to show the Birlings and Gerald the error of their ways, and prove that every action has a consequence that leads to others. Inspector Goole's entrance is ironic in the sense that as he breaks off Mr. Birling's speech, he's already started to penetrate the family and their beliefs. The Birlings from there on have to start reflecting on themselves and their actions and accept the responsibilities of them. In the final speech made by the Inspector, he says "But just remember this. One Eva Smith has gone- but there are millions and millions of Eva Smiths and John Smiths still left with us, with their lives, their hopes and fears..." ...read more.

All the events happening off stage e.g. the strike, sacking of Eva Smith and the interview of Eva with Mrs. Birling. The Inspector acts as a 'chorus' (as used in Greek plays) who sums up what has happened, comments on the action and characters. J B Priestly took his ideas for 'An Inspector Calls' for plays such as 'A Christmas Carol'. This links to the 'Ghost of Christmas past' in 'A Christmas Carol' because both the Inspector and the Ghost's purpose are to show the other characters the error of their ways. By the end of the play the younger generation have shown to redeem themselves, whereas the older generation show no remorse for their actions. In conclusion, J B Priestly uses many dramatic devices to express his socialist point of view. He clearly changes our opinion of the Birling's from act one. In the stage directions in act one; it states that the Birlings have good solid furniture and a three-course meal, which indicates that they are a respectable family. By the end of act one the Birlings high-class reputation to the audience has dissolved. Priestly withholds information from you which makes you want to read on, as you are aware there is more to come. Priestly's message of cause and effect, how one persons actions affect another's, is the moral of the play. Priestly wanted to demonstrate the values of life to the people the Birling family represent. By Hannah Walker-Wood 10 KRW ...read more.