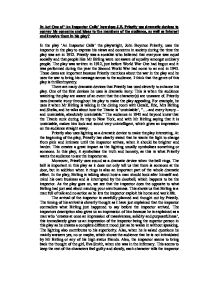 In Act One of An Inspector Calls how does J.B. Priestly use dramatic devices to convey his concerns and ideas to the members of the audience, as well as interest and involve them in his play?

In Act One of 'An Inspector Calls' how does J.B. Priestly use dramatic devices to convey his concerns and ideas to the members of the audience, as well as interest and involve them in his play? In the play 'An Inspector Calls' the playwright, John Boynton Priestly, uses the inspector in the play to express his views and concerns in society during the time the play was set in 1912. Priestly was a socialist who believed that everyone was equal socially and that people like Mr Birling were not aware of equality amongst ordinary people. The play was written in 1912, just before World War One had begun and it was performed during the year the Second World War had come to an end in 1945. These dates are important because Priestly mentions about the war in the play and he uses the war to bring his message across to the audience. I think that the genre of this play is thriller/mystery. There are many dramatic devices that Priestly has used cleverly to enhance his play. One of the first devices he uses is dramatic irony. ...read more.

Also, the inspector seems to bring back the thought of the girl, Eva Smith, when she was in the infirmary. This seems to keep the rest of the characters feel guilty and slowly, each character tells the inspector how they were involved with Eva Smith. This makes the inspector seem as the one who can take the truth out of anyone, and this is then referred to Priestly. Characters exits are also dramatic devices, which Priestly uses to develop his play. When some characters exit the plot of the play moves on, for example, when Eric leaves the dining room, the audience begin to anticipate that Eric is guilty or must have took a part for the death of Eva Smith. Priestly also uses character exits as a device in act two and three. This is a clever way of moving the play further as it is discreet yet revealing. Priestly ends of act one with a cliffhanger, which always keeps the audience wanting to know what, happens next. This is a dramatic device, which creates a great impact to the audience and Priestly has made a wise decision by using this device as it makes the reader wanting to read on and then keeps them intertwined within the story plot. ...read more.

Also, the way the inspector disappears and never hears from him makes it interesting and the fact that he can be seen as a ghost, because of his behaviour and of his name Inspector Goole, make him an interesting yet baffling character which definitively keeps the audience involved in the play. I think that the morale of this play is that everyone in this world is equal and no matter what you think your social status is amongst other people, you are seen as one when faced with justice. Priestly would have this view as he was a well renowned socialist whose main concerns were the lack of equality in society at the time of 1912. This message is still relevant in today's society because there is still a lack of equality amongst people, and some believe that they are higher socially due to there inherited name or the amount of income they receive or there relations with other high classed people. This view will be a view which will always remain in the midst of egotistical people as they will always believe they are superior, and people like Priestly are the ones who bring people like Mr Birling back to Earth by making it clear that social status is not important when judging a person. ?? ?? ?? ?? ...read more.