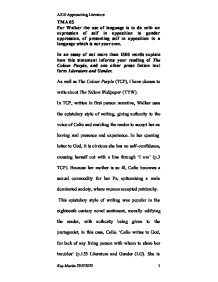 In an essay of not more than 1500 words explain how this statement informs your reading of The Colour Purple, and one other prose fiction text form Literature and Gender.

TMA 05 For Walker the use of language is to do with an expression of self in opposition to gender oppression, of presenting self in opposition to a language which is not your own. In an essay of not more than 1500 words explain how this statement informs your reading of The Colour Purple, and one other prose fiction text form Literature and Gender. As well as The Colour Purple (TCP), I have chosen to write about The Yellow Wallpaper (TYW). In TCP, written in first person narrative, Walker uses the epistolary style of writing, giving authority to the voice of Celie and enabling the reader to accept her as having real presence and experience. In her opening letter to God, it is obvious she has no self-confidence, crossing herself out with a line through 'I am' (p.3 TCP). Because her mother is so ill, Celie becomes a sexual commodity for her Pa, epitomising a male dominated society, where women accepted patriarchy. This epistolary style of writing was popular in the eighteenth century novel sentiment, morally edifying the reader, with authority being given to the protagonist, in this case, Celie. 'Celie writes to God, for lack of any living person with whom to share her troubles' (p.155 Literature and Gender (LG). ...read more.

Through Shug's didactic examples, Celie moves from her role of sexual commodity and a woman who was denied a voice for so long, to a woman with the power and confidence to succeed as a woman in her own right, who discovers her inner self and beauty. Coloured women didn't have privileges higher education; they were hindered by race, class and gender. 'It was the civil rights and feminist movements of the late 1960's and 1970's that led to the inclusion of previously 'silenced' and marginalized groups into the traditional white male literary canon' (p.149 LG). Endeavouring to include women writers in the curriculum focused mainly on white women, but black women writers have since made their way into the newly developing canon. Writing was a form of work denied to women for a long time and The Yellow Wallpaper (TYW) is a prime example of how unassailable male power determined the rules for female behaviour. Written in first person narrative, by someone who writes and also writes about wanting to write. Her husband and brother, who are both physicians, dominate the narrator of TYW and she is 'absolutely forbidden to 'work' until she is well again' (p.348 LG). Her husband John 'knows what is best for her', and in their patriarchal society, she has to accept this. ...read more.

And when she do, all us together gon whup your ass.' (p.170 TCP). She expresses herself in opposition to gender oppression, no longer accepting male dominance. In The Yellow Wallpaper, the narrator seems to express herself in relation to the wallpaper, losing herself in it. She appears to be liberating herself as a woman and opposing gender oppression in her own way, believing she has won and John can do nothing about it, writing 'I've got out at last,' said I, 'in spite of you and Jane. And I've pulled off most of the paper, so you can't put me back!' (p.359 LG). Both novels depict a changing of gender role. They epitomise patriarchal dominance, both women finding a way to express their inner selves in opposition to gender oppression. Celie (TCP) uses letter writing to offload her 'hysteria' and the unnamed narrator (TYW) overcomes her detestation of the wallpaper and uses it to 'liberate' herself from the normal domestic role expected of her, and from the patronising husband's language, such as 'What is it little girl?' (p.353 TYW). Through her hysteria, she interprets the patterns on the wallpaper with a female language which is deliberately illogical, Emotional, non-linear, intuitive, as opposed to rational and logical. She writes, 'There is a recurrent spot where the pattern lolls like a broken neck and two bulbous eyes stare at you upside down' (p.351 LG). Both women are using their own language against male authority. ...read more.