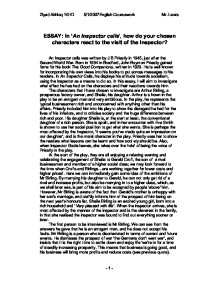 In 'An Inspector calls', how do your chosen characters react to the visit of the inspector?

ESSAY: In 'An Inspector calls', how do your chosen characters react to the visit of the inspector? An Inspector calls was written by J B Priestly in 1945, just after the Second World War. Born in 1894 in Bradford, John Boynton Priestly gained fame for his book The Good Companions, written in 1929. He is well known for incorporating his own views into his books to put across messages to his readers. In An Inspector Calls, he displays his attitude towards socialism, using the Inspector as a means to do so. In this essay, I will aim to investigate what effect he has had on the characters and their reactions towards him. The characters that I have chosen to investigate are Arthur Birling, a prosperous factory owner, and Sheila, his daughter. Arthur is shown in the play to be an arrogant man and very ambitious. In the play, he represents the typical businessmen: rich and unconcerned with anything other than his affairs. Priestly included him into his play to show the disregard he had for the lives of his inferiors, and to criticise society and the huge difference between rich and poor. His daughter Sheila is, at the start at least, the conventional daughter of a rich person. She is spoilt, and in her encounter with Eva Smith is shown to use her social position to get what she wants. ...read more.

Although nobody is above the law, we learn from this that Birling is under the impression that wealth and reputation gives him power, and by also mentioning his friendship with Colonel Roberts who is superior to the Inspector, he is confident that whatever wrong he has done, he can get away with it. At first, Mr Birling tries to reject any accusations made of his contact with Eva Smith at all, answering with vague statements that may or may not connect him with the girl. He states that he has a large company which employs hundreds of workers, so why should he have any connection with any single one? However, when Inspector Goole points out the fact of Eva Smith going on strike in a bid to attain higher wages, he is forced to acknowledge his links with her and tries to defend himself, ' she'd had a lot to say - far too much - so she had to go'. In doing so, he is doing the very thing Sheila later warns her mother not to do: don't build walls between you and the inspector, he'll just go and break it down. Later on, though, he is forced to admit his role in the death of Eva Smith, yet still denies any responsibility ' still, I can't accept any responsibility'. We can see now that Mr Birling is perhaps afraid of the inspector, and the damage this enquiry has done to his reputation. ...read more.

Sheila on the other hand maintains her views on learning from her mistakes and argues 'if it didn't end tragically then that's lucky for us, but it might have done'. She feels that no matter if the inspector was real or not, they still had plenty to do with the girl Eva Smith, and should have learned from their actions. This is a striking contrast to her father, though at the start of the play we find them quite similar - two very rich people, father and daughter, enjoying life; both having used their positions to get what they wanted, and both had some connection with the death of Eva Smith. Now, we see that Sheila has changed, and become regretful and less arrogant. What is interesting about her character is that she reacts to the Inspector's visit very quickly - almost as soon as she sees the photo. Mr Birling, however, maintains his stance right up to the end, 'Inspector, I'd give thousands - yes thousands', which shows that he firmly believes that money can sort out life's problems, and Priestly uses these tactics to shock the reader to realising that society cannot succeed when people like Mr Birling influence it, and great reforms are needed before society can be made better for all, which is the message J B Priestly wove into his books. ?? ?? ?? ?? Ziyad Akhlaq 10HD 5/1/2007English Coursework Mr. Lewis - 1 - ...read more.