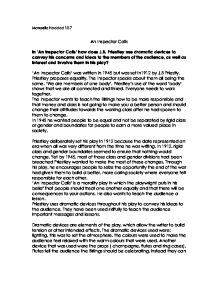 In An Inspector Calls how does J.B. Priestley use dramatic devices to convey his concerns and ideas to the members of the audience, as well as interest and involve them in his play?

In ‘An Inspector Calls’ how does J.B. Priestley use dramatic devices to convey his concerns and ideas to the members of the audience, as well as interest and involve them in his play?

‘An Inspector Calls’ was written in 1945 but was set in1912 by J.B Priestly. Priestley proposes equality. The Inspector speaks about them all being the same. ‘We are members of one body’. Priestley’s use of the word ‘body’ shows that we are all connected and linked. Everyone needs to work together.

The Inspector wants to teach the Birlings how to be more responsible and that money and class is not going to make you a better person and should change their attitudes towards the working class after he had spoken to them to change.

In 1945 he wanted people to be equal and not be separated by rigid class or gender and boundaries for people to earn a more valued place in society.

Priestley deliberately set his play in 1912 because the date represented an era when all was very different from the time he was writing. In 1912, rigid class and gender boundaries seemed to ensure that nothing would change. Yet by 1945, most of those class and gender divisions had been breached Priestley wanted to make the most of these changes. Through his play, he encourages people to seize the opportunity the end of the war had given them to build a better, more caring society where everyone felt responsible for each other.

‘An Inspector Calls’ is a morality play in which the playwright puts in his belief that people should treat one another equally and that there will be consequences to your actions. He also wants to teach the audience a lesson.

Priestley uses dramatic devices throughout his play to convey his ideas to the audience. They have been used skilfully to teach the audience important messages and lessons.

Dramatic devices are elements of the play, which allow the writer to build tension or other intended effects. The dramatic devices used were: lighting, this was to set the atmosphere, the colours were used to make the audience feel relaxed with the warm colours that were used. Another device that was used were the props ( champagne, flutes and ring cases). Flutes tell the audience the Birlings should be celebrating, instead they can sense tension and some unease. The ring gets the audience excited about a possible proposal. Dialogue was another dramatic device used, Birling makes many ill - judged predictions about the future. The audience know that what he says does not happen. This will make the audience lose faith in his character. He will be seen as wrong and old fashioned. Costumes was also one of the devices throughout the play. Men are wearing tails and white ties. This tells the audience that the Birlings are wealthy. They’re celebrating. J.B. Priestley is lulling the audience into a false sense of security.

The dramatic irony used very early on in the play is effective. Birling could make incorrect predictions about the titanic being ‘absolutely unsinkable’ and WW1 (which started two years later) .  Mr Birling is made to look very stupid by J.B. Priestley. He does this because Mr Birling is a capitalist which Priestley disliked.

Priestley uses lighting in his play to the changes in the atmosphere as at the start of the play the lighting is calm and casual, however when the Inspector enters the room it all ‘brightens’ up as if an angel has come on  stage. The audience are forced to focus on this visitor and are curious to find out what he has ‘called’ for.

The effect of having introduced a new major character  has made all the other family members realise that they all know Eva Smith but just pretended they didn’t or even haven’t heard of her. It is very clever how Priestley has written it so that they are all ‘responsible’ and had a part to play.

The end of act 1 had an effect on the audience. Tension is skilfully created here. The act ended on a cliff hanger so it makes them want to see the next act having been stimulated and challenged this far.

Inspector Ghoole himself is a dramatic device as his name ‘Ghoole’ meaning ghost. which really gets you thinking if he really is an Inspector especially when Mr Birling phones up and asks about the inspector and they find out that there isn’t anyone with that name.

In conclusion J.B. Priestley uses dramatic devices to transfer his concerns and ideas to the members of the audience as well as to get them interested in the play. During act 1, the playwright changed my opinion of the Birlings because they are wealthy people and they think having money and being in the upper class will make them a better person than the less fortunate ones.

The methods that Priestley uses to interest and involve the audience is by using various dramatic techniques such as dramatic irony, cliff hangers, lighting and setting.  He uses all his techniques to show his message and make sure the audience understand it. They also create tension.