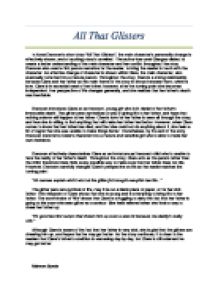 In Anne Donovans short story All That Glisters, the main characters personality change is effectively shown, and a touching story is unveiled.

All That Glisters In Anne Donovan's short story "All That Glisters", the main character's personality change is effectively shown, and a touching story is unveiled. The author has used Glasgow dialect to create a better understanding of the main character and her conflict throughout the story. Donovan also used a first person narrative for the reader, to bring the reader in touch with the character. An effective change of character is shown within Clare, the main character, who eventually turns her into a mature person. Throughout the story, there is a strong relationship between Clare and her father as the main theme of the story is shown between them, which is love. Clare is in essential need of her father; however, after the turning point she becomes independent. Her perspective of life changes generally, and she realizes that her father's death was inevitable. Donovan introduces Clare as an innocent, young girl who is in denial of her father's irrevocable death. The glitter pens symbolizes a way of giving life to her father, and hope that nothing solemn will happen to her father. Clare's love for her father is seen all through the story, and how she is willing to find anything that will make her father feel better. ...read more.

Clare feels as though her father's passing away has left something unfinished. However, she is unable to put her finger on it, and figure out what the unfinished business may be: "Ah felt that his going wis incomplete and ah wanted tae dae sumpn fur him..." Donovan uses the word-choice of "incomplete" to show that although Clare has accepted the fact that her father has passed away, there is still something missing. Therefore, Clare finds a way to figure out the incomplete feeling. She recalls her memory with her father, when she had worn a red dress for her birthday and her father had called her a princess in it. Acting on first instinct, Clare decides to wear the red dress to the funeral, thinking that it might give peace to her father. After wearing the dress, she encounters her aunt and the conflict of the story is revealed: "Whit the hell dae you think you're daeing? Go and get changed this minute." "You cannae wear red tae a funeral. You have tae show respect fur the deid." Clare's aunt gets a sudden shock seeing Clare wearing red to the funeral. The characterization of her aunt shows that she is very traditional and goes according to the customs of the convention. ...read more.

The conversation was when Clare had returned home from school, and was telling her father about how her teacher had called the glitter "subtle". Her father had asked her what she meant by "subtle", but being a child, she was unable to explain it in words, so she had decided to show it to him. However, after the death of her father, Clare now understands what the true meaning of "subtle" for glitter was - even though it is a small detail, it holds great importance for Clare. Overall, Ann Donovan has skilfully led an effective change of Clare's character from the start of the story to the ending. She had started with emphasizing Clare's youthfulness, and eventually turned her into a character who has respect for others and does not wish to create problems due to her loss. Although, Clare was in denial of her father's inevitable death, she had an inside feeling that no matter what the day was to come soon. However, she had ignored it by using glitters as an asset to bring life back to her father. After the conflict, Clare's infantile behaviour takes a turn and she realises the reality of life and becomes an independent girl, which is a positive outcome for Clare. ?? ?? ?? ?? Maheen Syeda ...read more.