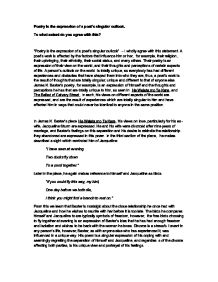 In Baxters two poems, He Waiata mo Te Kare and The Ballad of Calvary Street, his singular views on two differing circumstances of marriage are expressed

Poetry is the expression of a poet's singular outlook. To what extent do you agree with this? "Poetry is the expression of a poet's singular outlook" - I wholly agree with this statement. A poet's work is affected by the factors that influence him or her, for example, their religion, their upbringing, their ethnicity, their social status, and many others. Their poetry is an expression of their view on the world, and their thoughts and perceptions of certain aspects of life. A person's outlook on the world is totally unique, as everybody has had different experiences and obstacles that have shaped them into who they are, thus, a poet's work is the result of thoughts that are totally singular, unique and different to that of anyone else. James K. Baxter's poetry, for example, is an expression of himself and the thoughts and perceptions he has that are totally unique to him, as seen in He Waiata mo Te Kare, and The Ballad of Calvary Street. ...read more.

From this we learn that Baxter is nostalgic about the close relationship he once had with Jacqueline and how he wishes to reunite with her before it is too late. The birds he compares himself and Jacqueline to are typically symbols of freedom, however, the free birds choosing to fly together at evening is an expression of Baxter's idea that he has had enough freedom and isolation and wishes to be back with the woman he loves. Divorce is a stressful event in any person's life, however, Baxter, as with anyone else who has experienced it, was influenced in a unique way. His poem is a singular expression of his coping with and seemingly regretting the separation of himself and Jacqueline, and regardless of the divorce affecting both parties, is his unique view and portrayal of his feelings. James K. Baxter's earlier poem, The Ballad of Calvary Street, is another example of his views on love, however, it is an artificial love that greatly contrasts the passion and dedication he felt toward Jacqueline. ...read more.

He describes how Yin and Yang, the opposing yet complimentary aspects of a relationship, wouldn't meet in their relationship, and questions the sanctity of marriage as a religious right if there is no real feeling between them. "Why hammer nails?" Baxter's views on a lacklustre marriage, such as the one portrayed in the poem, are singular, and this poem is an expression of those views and his feelings about the lack of love and affection in the relationship. In Baxter's two poems, He Waiata mo Te Kare and The Ballad of Calvary Street, his singular views on two differing circumstances of marriage are expressed; in the first, his devotion to his ex-wife and nostalgia about the relationship they shared is clearly portrayed, while in the second, he explores the idea of a failing marriage that reflects negatively upon religious practices due to its lack of genuine feeling. Both pieces are clear examples of his singular views, and while each express these in different ways, are evidence that poetry is indeed the expression of a singular outlook. Georgia Armstrong ...read more.