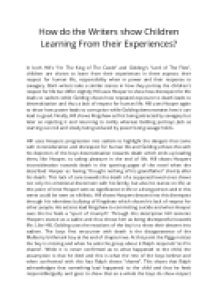 In both Hills I'm The King of The Castle and Golding's Lord of The Flies, children are shown to learn from their experiences

Transfer-Encoding: chunked ﻿How do the Writers show Children Learning From their Experiences? In both Hill?s ?I'm The King of The Castle? and Golding's ?Lord of The Flies?, children are shown to learn from their experiences in three aspects: their respect for human life, responsibility when in power and their response to savagery. Both writers take a similar stance in how they portray the children's respect for life but differ slightly; Hill uses Hooper to show how disrespect for life leads to sadism while Golding shows how repeated exposure to death leads to desensitisation and thus a lack of respect for human life. Hill uses Hooper again to show how power leads to corruption while Golding demonstrates how it can lead to good. Finally, Hill shows Kingshaw as first being attracted by savagery but later as rejecting it and returning to civility whereas Golding portrays Jack as starting out civil and slowly being seduced by power being savage holds. Hill uses Hoopers progression into sadism to highlight the dangers that come with inconsideration and disrespect for human life and Golding echoes this with his depiction of the boys desensitisation towards death which ends up leading them, like Hooper, to taking pleasure in the end of life. ...read more.

This changes once again with the death of Piggy. When Piggy dies Jack exclaims ?See? See? That's what you'll get?. The fact the Jack makes this threat following the death of Piggy, and that the tribe cheers him on for saying it, show that the boys no longer understand the significance of death and no longer respect human life. This has ties with the idea of British superiority that was held at time time. The belief stated that the British were civil and that the rest of the world were savages; Golding challenges this idea by instead proposing that all people are capable of savagery Hill uses Hooper once more to explore the consequences that arise when one is not responsible with the way they handle power. This abuse of power is first hinted at in Hoopers body language. Hill describes Hooper at one point as having ?moved nearer, menacing? in order to receive an answer from Kingshaw. This bold use of intimidation shows Hoopers willingness to demean and scare others in order to facilitate his own desires. As the novel progresses Hill starts to show Hooper delve into different forms of intimidation, mainly the use of psychological bullying. Hill characterises these demeaning taunts through the use of patronising language as can be seen in the line ?aren't you scaredy, all by yourself in the ...read more.

This goes to show that while Kingshaw may desire to reflect some of the pain he has received back to Hooper, when he is actually given the ability to do so he is incapable of doing so out of sheer kindness. This change in stance shows Kingshaw as having rejected savagery and accepted civility. This is not entirely reflected by Golding. Instead of showing an eventual salvation Golding shows how power can totally corrupt someone through Jack. Jack is initially shown as being relatively civil as when he attempts to kill a baby pig he understands what an ?enormity the downward stroke would be?. ?Enormity? perfectly encapsulates the struggle going on in Jack's brain, as killing the pig would result in Jack abandoning everything he has been taught about being civil up till this point. Unfortunately, Golding shows Jack to give into savagery and it comes to the point where Jack becomes almost sadistic in nature, taking pleasure in Piggy?s death exclaiming ?See? See?? This joyful way of talking about something is in stark contrast to the events that just took place and serve to show how power and savagery can corrupt ones way of thinking. Overall the writers take similar stances when it come to the numerous topics but they each have their slightly different take on it. One thing both writers demonstrate however is the inherent evil in man that can affect all people. ...read more.