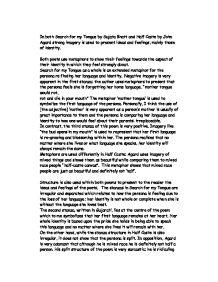 In both Search for my Tongue by Sujata Bhatt and Half Caste by John Agard strong imagery is used to present ideas and feelings, mainly those of identity.

In both Search for my Tongue by Sujata Bhatt and Half Caste by John Agard strong imagery is used to present ideas and feelings, mainly those of identity. Both poets use metaphors to show their feelings towards the aspect of their identity in which they feel strongly about. Search for my Tongue as a whole is an extended metaphor for the persona re finding her language and identity. Negative imagery is very apparent in the first stanza; the author uses metaphors to present that the persona feels she is forgetting her home language. "mother tongue would rot, rot and die in your mouth" The metaphor 'mother tongue' is used to symbolize the first language of the persona. Personally, I think the use of [the adjective] 'mother' is very apparent as a person's mother is usually of great importance to them and the persona is comparing her language and identity to how one would feel about their parents: irreplaceable. ...read more.

The stanzas in Search for my Tongue are irregular and separated which relates to how the persona is feeling due to the loss of her language; her identity is not whole or complete when she is without the language she loves best. The second stanza, written in Gujarati, lies at the centre of the poem which to me symbolizes that her first language remains at her heart. Her whole identity is based upon the pride she holds in being able to speak this language and no matter where she lives it will remain with her. On the other hand, while the stanza structure in Half Caste is also irregular, it does not show that the persona is split. In opposition, Agard is very adamant that although he is mixed race he is definitely not half a person. ...read more.

Similar to the structure in Half Caste, the use of repetition is also very sarcastic "de whole of yu eye an de whole of yu ear an de whole of yu mind". Agard is questioning the ignorance of people who use the term 'half cast' and is making them appear foolish as the imagery that this repetition creates would suggest that they only use half of themselves when talking to mixed race people, effectively making them the 'half castes'. In conclusion, both Bhatt and Agard have use imagery which presents the ideas and feelings that the poems are based around. I think that the use of metaphor, structure and repetition in each poem is very effective in emphasizing to the reader the importance of the poets' ideas and feelings about their identity. ...read more.

This is a response for a question that orientates around the ideas and feelings of identity in Sujata Bhatt's 'Search For My Tongue' and John Agard's 'Half-Caste'. In this answer, there is a good demonstration of ability to successfully analyse ...

This is a response for a question that orientates around the ideas and feelings of identity in Sujata Bhatt's 'Search For My Tongue' and John Agard's 'Half-Caste'. In this answer, there is a good demonstration of ability to successfully analyse poetry, though there is a moment where the candidate appears to have forgotten or ignored the steer of the question, which directs the candidates to consider the use of "strong imagery" only. There are sections in this answer which draw effective comparisons, but because their focus on the question is lost and the candidate finds themselves answering a question which has not been asked here, they can only gain limited marks for the said sections. It is absolutely imperative that candidates read the question properly - it seems such an obvious thing to do that often, when under the pressure of writing an essay in a time constraint, is so easily disregarded - candidates will not earn as many marks as they might hope to gain if they do not concentrate specifically on what the question asks.

The Level of Analysis shown is very good, though only a few parts of it contribute directly to what the question asks. There is sound analysis of the structure of the essay, but alas this cannot hope to earn as much marks as it would were the question asking for a more general analysis or specifically an analysis of structure. However, as this question states that the analysis must be primarily of "strong imagery" used to "present ideas and feelings", the essay response's final mark is not as good as it could be had the candidate commented predominantly on the imagery. Imagery consists of similes, metaphors, personification and, where applicable, pathetic fallacy, and these should be identified an commented on.
Where the candidate exceeds, is their close, very adept analysis of the language used to create the imagery. In moments where the candidate has commented on the use of words like "rot" and "die", there is sufficient evidence to suggest that the candidate is operating a strong B grade for GCSE. This precise analysis of singular words rather than clunkily-quoted lines of stanzas is effective and indicative of higher ability candidates.

The Quality of Written Communication (QWC) here is good. There are no moments where the candidate has glaringly disregarded the expected standards of grammar, spelling and punctuation; three of the main areas that comprise the QWC mark. I would encourage though, to improve, a better use of more complex vocabulary and punctuation points like semi-colons and colons - these help create a sense of confidence and enthusiasm in your answer as they show how adept you are at handling complicated modes of language.