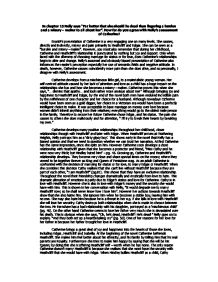 In chapter 15 Nelly says &quot;Far better that she should be dead than lingering a burden and a misery - maker to all about her&quot;. How far do you agree with Nelly's assessment of Catherine?

In chapter 15 Nelly says "Far better that she should be dead than lingering a burden and a misery - maker to all about her". How far do you agree with Nelly's assessment of Catherine? Bront�'s presentation of Catherine is a very engaging one on many levels. She causes, directly and indirectly, misery and pain primarily to Heathcliff and Edgar. She can be seen as a "burden and misery - maker". However, you must also remember that during her childhood, Catherine and Heathcliff's relationship is punctuated by nothing but joy and support. Only when faced with the dilemma of choosing marriage for status or for love, does Catherine's relationships begin to alter and change. Nelly's assumed and obviously biased presentation of Catherine also influences the reader's perception especially her use of semantic fields and negative attitude. In death, however, Catherine causes coincidently more pain than she does alive, and so personally, I disagree with Nelly's assessment. Catherine develops from a mischievous little girl, to a materialistic young woman. Her self-centred attitude caused by her lack of attention and love as a child has a huge impact on the relationships she has and how she becomes a misery - maker. Catherine proves this when she says, "... dismiss that apathy... and look rather more anxious about me!" Although bringing joy and happiness to Heathcliff and Edgar, by the end of the novel both men have endured incredible pain by the selfishness of one character and her choice for a husband. Although nowadays Catherine would have been seen as a gold digger, her choice in a Victorian era would have been a perfectly intelligent choice to make. It was acceptable to base marriage on money over love because women didn't inherit anything from their relatives; everything would go to the oldest male person in the family. Therefore to secure her future Catherine chose Edgar, and his status. ...read more.

Hindley also hurt other characters as a lad: Heathcliff, "He would stand Hindley's blows without winking or shedding a tear" (pg. 46). When Hindley doesn't attend Catherine's funeral he is hurting himself! Hindley became the master of Wuthering Heights and stopped Heathcliff's schooling and forced him to work as a servant in his house, "He drove him from their company to the servants, deprived him of the instructions of the curate, and insisted that he should labour out of doors instead" (pg.52) - this treatment may also have been provoked by Frances (Hindley's wife), who hated the boy as well. Mr Earnshaw in this respect causes much pain indirectly himself, when he brings Heathcliff home with him, because he changes, "the young master had learned to regard his father as an oppressor rather than a friend, and Heathcliff as a usurper of his parent's affections and his privileges." Mrs Earnshaw is not spoken of regularly but does not appear to like the idea of a 'gipsy boy' staying in her home either, "Mrs Earnshaw was ready to fling it out of doors: she did fly up, asking how he could fashion to bring that gipsy brat into the house" (pg. 45) - this quote shows that she is hurt by both men (Heathcliff and Mr Earnshaw) indirectly. Mrs Earnshaw could be prosecuted nowadays for racist discrimination, however in Victorian Times coloured people were lower than children and had no rights. This would have added to the dilemma Catherine had to face - since she had been wealthy and respected all her life, it would have been very difficult to be known as the opposite for the rest of her life even if that did mean marrying for love and not status. Mr Earnshaw injures his daughter (Cathy), by trying to make her obedient, "Nay, Cathy. I cannot love thee; thou'rt worse than thy brother. ...read more.

The effects of marrying Edgar are physically improved when she begins to dress in expensive clothes and jewellery her lexical density also increases. A Victorian reader would respond to this situation in a positive way, because at the time it would be easier to understand her decision to marry Edgar. Whereas a modern reader would probably perceive Cathy as a gold digger, and would encourage her feelings for Heathcliff since nowadays women have been given equal rights and racism has been abolished from society. The modern reader would subconsciously have a bad picture formed of Catherine when she says, "I love Heathcliff but need to marry Edgar". In conclusion I believe that Nelly's assessment of Catherine being "a misery - maker to all about her" is not correct. Catherine has been a joy in parts of the book to all the characters. Only when she is forced to make a decision she finds difficult does she show signs of selfishness, and then in her own discomfort and anger does she infect her surroundings. I don't believe that Catherine is na�ve to the fact that she is the direct source of pain to those she loves, and therefore Nelly's assessment "an unfeeling child", is correct; for Catherine can control her health, emotions and other people. I agree with Nelly to the extent that Catherine is a misery - maker to all about her in the last couple of years of her life. However in death I feel that Catherine causes more pain than when she was alive because both Edgar and Heathcliff are devastated, " I feel that Nelly's assessment of Catherine is unjust because the only person who is free from Catherine's misery - making is Nelly; and Nelly who has caused a fair deal of pain should not be able to make such an unjust evaluation. A more suitable assessment of Catherine would be, "Far better that she should be dead than lingering a burden and a misery - maker to me". ...read more.