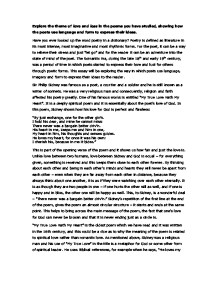 In conclusion, the poems which I have studied describe a range of emotions from extreme love and happiness to extreme sadness and depression.

Explore the theme of love and loss in the poems you have studied, showing how the poets use language and form to express their ideas. Have you ever looked up the word poetry in a dictionary? Poetry is defined as literature in its most intense, most imaginative and most rhythmic forms. For the poet, it can be a way to relieve their stress and just "let go" and for the reader it can be an adventure into the state of mind of the poet. The Romantic Era, during the late 18th and early 19th century, was a period of time in which poets started to express their love and lust for others through poetic forms. This essay will be exploring the way in which poets use language, imagery and form to express their ideas to the reader. Sir Philip Sidney was famous as a poet, a courtier and a soldier and he is still known as a writer of sonnets. He was a very religious man and consequently, religion and faith affected his poetry greatly. One of his famous works is entitled "My True Love Hath My Heart". It is a deeply spiritual poem and it is essentially about the poet's love of God. In this poem, Sidney shows how his love for God is perfect and flawless: "By just exchange, one for the other giv'n. I hold his dear, and mine he cannot miss: There never was a bargain better driv'n. His heart in me, keeps me and him in one, My heart in him, his thoughts and senses guides. He loves my heart, for once it was his own: I cherish his, because in me it bides." This is part of the opening verse of the poem and it shows us how fair and just the love is. Unlike love between two humans, love between Sidney and God is equal - for everything given, something is received and this keeps them close to each other forever. ...read more.

He uses Biblical references, for example, when he says, "I would/Love you ten years before the Flood;/And you should, if you please, refuse/Till the conversion of the Jews", he is talking about the story of Noah's Arc and he is basically saying that if you refuse my love it will not matter, because my love for you is eternal and never ending (the Jews will never convert). The character is showing off, but he could also be putting on an act to show her that he is cultured and sophisticated - this could be another attempt to win her heart and to get her to sleep with him. Marvell portrays the characters eternal love for her by using the hyperbole, "My vegetable love should grow/Vaster than empires, and more slow." Again, the character is showing off the fact that he is well educated, by mentioning his knowledge of the Roman Empire which was extremely strong at the time. I think that this imagery is extremely effective because as soon as you read it, you see images of a small seed, which grows slowly and steadily until eventually, it becomes "Vaster than empires." The use of this metaphor shows how his love for her will grow slowly into something immense and complex. He compares his love for her to the greatest Empire and again, he is flattering her and telling her all of the things which she wants to hear from him. Marvell uses all of these different conventions to bring across his message of love and lust throughout the poem; and it is effective because it is continuous throughout the first few stanzas. The second part of the poem talks about what will happen and in this section, the main themes are death, loneliness and old age. I think that in a way, Marvell is trying to make his mistress afraid of the future, afraid of what would happen when she's not beautiful anymore and afraid of how time is passing quickly. ...read more.

The wording of the title of the poem is very effective because it is a question, one to which the reader would like to find the answer of. This will encourage the reader to continue reading the poem and to see what Browning is talking about. Browning uses very descriptive words, such as "passion" and "ideal Grace" cause the reader to "feel" what she is talking about and it enables the reader to actually get an insight into her emotions and feelings. This is a very powerful effect which causes the reader to become engrossed in the poem and to think about what it is like to love some one so much that you are willing to do anything for them. This is my favourite poem out of all of the poems which I mention in this essay for the simple reason that it manages to convey the emotions and feelings of the poet to the reader and this makes the poem more emotive and heartfelt. Love can be, at times, a wonderful and joyous thing, however losing someone after loving them is a tragedy and can result in serious depression and grief. Lord Byron, a poet renowned for his love affairs (with his half-sister as well as many other women) and his experiences of public scandals, wrote a poem entitled, "When We Two Parted". It is said to have been written for Lady Francis Webster, a women who he was deeply in love with. The poem is about how he has lost the one woman who he truly loved and how he is going through a period of depression where he cannot stop thinking about her. He uses two different senses to convey how hurt he feels in different ways. He says, "Paler grew thy cheek and cold,/Colder they kiss" and this shows how she had become cold towards him and how her kisses were less passionate and loving. This shows us that he knew even before the separation that there was something wrong with the relationship, but he just didn't want to admit it because he loved her too much. ...read more.