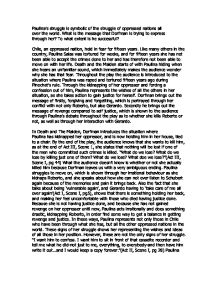 In Death and The Maiden, Paulina's struggle is symbolic of the struggle of oppressed nations all over the world. What is the message that Dorfman is trying to express through her? To what extent is he successful?

Paulina's struggle is symbolic of the struggle of oppressed nations all over the world. What is the message that Dorfman is trying to express through her? To what extent is he successful? Chile, an oppressed nation, held in fear for fifteen years. Like many others in the country, Paulina Salas was tortured for weeks, and for fifteen years she has not been able to accept the crimes done to her and has therefore not been able to move on with her life. Death and the Maiden starts of with Paulina hiding when she hears an unfamiliar sound, which immediately makes the audience wonder why she has that fear. Throughout the play the audience is introduced to the situation where Paulina was raped and tortured fifteen years ago during Pinochet's rule. Through the kidnapping of her oppressor and forcing a confession out of him, Paulina represents the wishes of all the others in her situation, as she takes action to gain justice for herself. Dorfman brings out the message of firstly, forgiving and forgetting, which is portrayed through her conflict with not only Roberto, but also Gerardo. Secondly he brings out the message of revenge compared to self justice, which is shown to the audience through Paulina's debate throughout the play as to whether she kills Roberto or not, as well as through her interaction with Gerardo. ...read more.

The fact that she wants Roberto to confess, the fact that she wants a copy on tape and handwritten copy to keep, shows the audience that even a simple act such as this is going to help her. It shows the audience that she is so desperate to have something to hold onto, to help her let go. Paulina also has a situation with Gerardo, which holds her back, and which keeps her from killing Roberto throughout the play. The audience learns that Paulina was taken because her oppressors wanted to know Gerardo's name, but she never gave it to him. When they finally let her go, she went back home, and finds Gerardo with another woman. When the play commences, Paulina has a very strange conversation with Gerardo, which brings up questions in the audiences mind as to what to expect. "Was she pretty at least? Sexy...Why do you always have to suppose there's a woman... Why indeed? I just cant imagine why." Here Paulina is talking about the person who brought Gerardo home. She is suspicious of it being a woman, and the audience immediately questions why she would make such accusations. We later learn that there is great tension between Gerardo and Paulina. Paulina has not been able to let go of Gerardo cheating on her, which we see when she makes Gerardo tell her about the affair. ...read more.

Paulina has acted on her impulses to help herself be free, whereas most others will only think about it. Dorfman also shows the audience that those who seek self justice often start trying to gain revenge, yet they do not know they have crossed the borderline between the two. In Death and The Maiden, Paulina is made to represent the thoughts and wishes of all those who have been oppressed, not only in Chile but in oppressed nations all over the world. Dorfman represents these people through Paulina's actions. Firstly, we see this through Paulina kidnapping her oppressor and forcing a confession out of him. We also see this representation when Paulina decides that she wants to kill Roberto, although we do not know if she does or not. Paulina is shown to be crossing the line between self justice and revenge, which represents all those in her situation. Dorfman tries to show that people who try to gain self justice often end up crossing the lines to revenge without even knowing it. Death and The Maiden, is a play to show the world the mental and emotional state of those who had been oppressed in Chile during the rule of Pinochet. Ariel Dorfman uses the character of Paulina, and her actions and interactions with other characters to represent not only those oppressed in Chile, but all other oppressed nations around the world. ...read more.