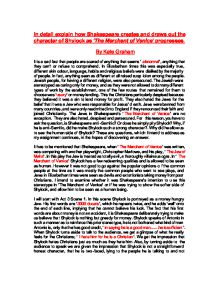 In detail explain how Shakespeare creates and draws out the character of Shylock as &amp;#145;The Merchant of Venice&amp;#146; progresses.

In detail explain how Shakespeare creates and draws out the character of Shylock as 'The Merchant of Venice' progresses. By Kate Graham It is a sad fact that people are scared of anything that seems 'abnormal', anything that they can't or refuse to comprehend. In Elizabethan times this was especially true, different skin colour, language, habits and religious beliefs were disliked by the majority of people. In fact, anything seen as different at all raised suspicion among the people. Jewish people, for having a different religion, were also persecuted. The Jewish were stereotyped as caring only for money, and as they were not allowed to do many different types of work by the establishment, one of the few routes that remained for them to choose was 'usury' or money lending. This the Christians particularly despised because they believed it was a sin to lend money for profit. They also hated the Jews for the belief that it was a Jew who was responsible for Jesus' death. Jews were banned from many countries, and were only readmitted into England if they renounced their faith and joined Christianity. The Jews in Shakespeare's 'The Merchant of Venice' are no exception. They are also hated, despised and persecuted. For this reason, you have to ask the question, is Shakespeare anti-Semitic? Or does he simply pity Shylock? Why, if he is anti-Semitic, did he make Shylock such a strong character?. Why did he allow us to see the human side of Shylock? These are questions, which I intend to address as my assignment continues, in the hopes of discovering an answer. It has to be mentioned that Shakespeare, when 'The Merchant of Venice' was written, was competing with another playwright, Christopher Marlowe, and his play, 'The Jew of Malta'. In this play the Jew is treated as totally evil, a thoroughly villainous ogre. In 'The Merchant of Venice' Shylock has a few redeeming qualities and is allowed to be seen as human. ...read more.

When the play was written I believe she would've been seen as a 'bad' character, had she not converted to Christianity. In the next scene Act 2 Scene 6 Jessica is clearly ashamed of what she has done, 'I am glad 'tis night, you do not look on me, For I am most ashamed of my exchange'. In these sentences by being ashamed of her exchange she tells us she is ashamed of wearing boy's clothing to escape, exchanging her father for her lover, changing into a thief from a lady, and changing religions. She is sorry she has to do this to her father, but it must be done for love, as Shylock would never permit her to associate with Christians, let alone marry one. Shylock reacts terribly when he discovers his daughter has fled with a Christian. He told the duke what had happened and the duke went with him to 'search Bassanio's ship'. However, they were too late, the ship had set sail, but Antonio assured the duke that Lorenzo and Jessica 'were not' in his ship. Then it was reported that the eloping couple have been seen in a gondola together. We find this information out in Act 2 Scene 8, where once again the Christians keep up this portrayal of Shylock as the devil, as a 'villain' and a 'dog'. They laugh at his misfortune, as they do not see Shylock as another human being, just as a devil, and find particular delight in the fact that the children of Venice follow him through the streets and humiliate him further by imitating the words he calls out in distress. This also shows that the children are raised to be prejudiced, as you are not born racist, even they make fun of the Jews. The words which he shouts give us a clear insight into how he is feeling, 'My daughter! ...read more.

The man who thought of his religion as a 'sacred nation' must now become what he despises most. Shylock is now 'not well' from these late developments and leaves the courtroom, in disgrace. I should imagine that in Elizabethan times the audience found this hilarious, and laughed as the poor tormented character of Shylock left the stage. People in those times did not realise racism was wrong for it was so far widespread it was considered normal to be racist. Anything that wasn't 'normal' was suspicious to people. In the present day, a lot of prejudice and racism still exists. It might not be tolerated by law but it definitely still exists, but I should hope that an audience watching this play would feel sorry for Shylock, and certainly be a lot more sympathetic than the Elizabethan people were. The modern day audience would see that Shylock's hate of Christians developed over years of physical and mental torture he endured, and that his 'ancient grudge' with Christians comes from their mutual hatred, which Shylock did nothing to deserve. People treated him like an animal, simply because he was a Jew, I should hope that modern audiences have progressed to a degree of humanity where they too can see this. It is actually impossible to decide if Shakespeare was anti-Semitic or not, there is evidence for both sides of the argument. The way Shakespeare makes Shylock such a vengeful character indicates he was prejudiced against Jews, but the way he gives Shylock a reason for his bloodthirstiness, indicates that at the very least he was more sympathetic towards the Jewish people than others at the time. If he was not racist, he would be among the very few Elizabethan people that weren't as racism was normal in those days, however, who am I to decide that one of the best playwrights that ever lived fitted in with convention? It is impossible for anybody to know for certain, as we have no personal experience of Shakespeare, and unfortunately, because of this fact, it is unlikely we will ever know the truth. ...read more.