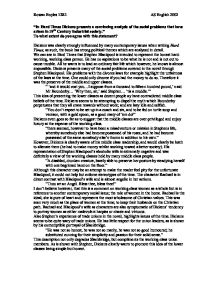 &quot;In Hard Times Dickens presents a convincing analysis of the social problems that have arisen in 19th Century industrial society&quot; - To what extent do you agree with this statement?

"In Hard Times Dickens presents a convincing analysis of the social problems that have arisen in 19th Century industrial society." To what extent do you agree with this statement? Dickens was clearly strongly influenced by many contemporary issues when writing Hard Times, as such, the book has strong political themes which are analysed in detail. We can see in Hard Times that Stephen Blackpool is intended to represent the honest hard-working, working class person. He has no aspirations to be what he is not and is not out to cause trouble. All he wants is to lead an ordinary fair life which however, he knows is almost impossible. Dickens presents many of the social problems covered in the novel through Stephen Blackpool. His problems with the divorce laws for example highlight the unfairness of the laws at the time. One could only divorce if you had the money to do so. Therefore it was the preserve of the middle and upper classes. " 'and it would cost you...I suppose from a thousand to fifteen hundred pound,' said Mr Bounderby... 'Why then, sir,' said Stephen... 'tis a muddle.'" This idea of presenting the lower classes as decent people ay have contradicted middle class beliefs of the time. Dickens seems to be attempting to dispel the myth which Bounderby perpetuates that they all crave rewards without work; and are lazy idle and selfish. ...read more.

This description not only degrades Slackbridge, but compliments the working class union members. As is shown with Stephen, Dickens clearly wants to promote this idea of the lower classes being simple but honest. The majority of these lower class people in Coketown live in squalor. The descriptions of Coketown itself are bleak and depressing. Dickens was influenced in his descriptions by experience of factory towns and is commenting on the unsanitary conditions in which many people live within these towns. "It was a town of red brick, or of brick that would have been red if the smoke and ashes had allowed it." There are descriptions in the novel clearly meant to highlight this issue, such as bodies being carried down ladders. The mention of the unattended churches in Coketown is in reference to fading religious beliefs at the time. Also, the descriptions of Coketown demonstrate Dickens hatred of the mechanical anonymity that developed in industrial cities. The people lose their identity and become machines, whilst everything around them works monotonously without imagination. "It contained several large streets all very like one another, and many small streets still more like one another, inhabited by people equally like one another, who all went in and out at the same hours." The major theme of the book, the idea of fact versus imagination is obviously related to social issues at the time. ...read more.

Gradgrind's method is inherently hypocritical. It claims to breed scientists and concentrates only on the factual subjects such as science and maths, but without imagination there would be no scientific progression. Most theories are a result of deep scientific insight coupled with active imagination. If current ideas were not questioned and all science was accepted at face value as fact, science would come to a halt. Most science is also theoretical and therefore not factual by its very nature. Dickens objections to some areas of utilitarianism however are unfounded. His disgust at the use of statistics to assess the needs of the population is extreme and he offers no viable alternative to their use. It would be impossible to, as he suggests, understand every individual on a personal level in order to judge the needs of society. "As if an astronomical observatory should be made without any windows, and the astronomer should arrange the starry universe solely by pen, ink and paper, so Mr Gradgrind, in his observatory, had no need to cast an eye on the teeming myriads of human beings around him..." Dickens does present a very interesting analysis of many issues that were present at the time. Much material is covered relating to many aspects of Victorian society. However, Hard Times is by no means a historical account and Dickens obviously presents these problems from his own point of view. As such one must understand, that while useful, much of the material is biased. Rowan Boyles 12R1 AS English 2002 ...read more.