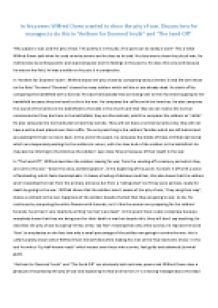 In his poems Wilfred Owen wanted to show the pity of war. Discuss how he manages to do this in Anthem for Doomed Youth and The Send-Off

﻿In his poems Wilfred Owen wanted to show the pity of war. Discuss how he manages to do this in ?Anthem for Doomed Youth? and ?The Send-Off? ?My subject is war, and the pity of war. The poetry is in the pity. All a poet can do today is warn? This is what Wilfred Owen said when he used to write poems and he does as he said. His duty was to show the pity of war, his method was by writing poems and expressing war and his feelings in the poems. He does this very well because he was on the field, he was a soldier so he puts it in perspective. ...read more.

The only pale thing is the soldiers? families which are left behind and are waiting for them to return back. In the end of the poem, he compares the blinds of those in Britain (at home) which are desperately waiting for the soldiers to return, with the slow dusk of the soldiers in the battlefield. He may also be referring to the blinds as the soldiers? eyes close forever because of their death in the war. In ?The Send Off?, Wilfred describes the soldiers leaving for war, from the sending-off ceremony and which they are sent to the war. ?down the close, darkening lanes?, in the beginning of the poem, he starts it off with a sense of foreboding, which feels claustrophobic. ...read more.

He describes the pity of war by saying ?A few, a few, too few? meaning that only a few survive, he repeats the word ?few? to emphasize on the fact that only a small percentage of the soldiers are going to survive the war, this is unfortunately shown when Wilfred Owen himself died while leading his men at the final moments of war. In the end he writes ?Up half-known roads? which means even those who survive, feel guilty and ashamed (survival guilt). ?Anthem for Doomed Youth? and ?The Send-Off? are obviously both anti-war poems and Wilfred Owen does a great job of expressing the pity of war and explaining its fear and horrors. It?s a moving message about the dead soldiers which are treated like animals and whom don?t get a proper burial, a funeral, its subject is war and the pity of war. ...read more.