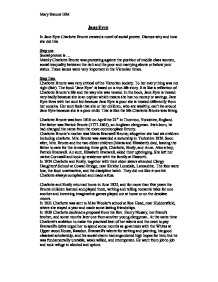 In Jane Eyre Charlotte Bronte created a novel of social protest. Discuss why and how she did this.

In 1831 Charlotte was sent to Miss Wooler's school at Roe Head, near Huddersfield, where she stayed a year and made some lasting friendships. In 1839 Charlotte declined a proposal from the Rev. Henry Nussey, her friend's brother, and some months later one from another young clergyman. At the same time Charlotte's ambition to make the practical best of her talents and the need to pay Branwell's debts urged her to spend some months as governess with the Whites at Upper wood House, Rawdon. Branwell's talents for writing and painting, his good classical scholarship, and his social charm had engendered high hopes for him; but he was fundamentally unstable, weak willed, and intemperate. He went from job to job and took refuge in alcohol and opium. Meanwhile Charlotte had planned to open a school with her sister emily. Her aunt had agreed to finance, and in February 1842 Charlotte and Emily went to Brussels as pupils to improve their qualifications in French and acquire some German. The talent displayed by both brought them to the notice of Constantin H�ger, a fine teacher and a man of unusual perception. ...read more.

Women didn't have the chance to speak out. Also in the Victorian times the rich and the poor were never seen with each other. Poor people were seen as low life people who were tramps. Love above classes was really an issue to many families. Some families didn't like their daughters/sons to marry someone who was poor/ lower than them. This caused a problem, which meant that not a lot of poor people were needed. Step 4 Charlotte Bront�, like her sisters, appears at first sight to have been writing a literal fiction of provincial life. In her first novel, Jane Eyre (1847), for example, the heroine's choice between sexual need and ethical duty belongs very firmly to the mode of moral realism. But her hair's-breadth escape from a bigamous marriage with her employer, and the death by fire of his mad first wife derives from the rather different tradition of the Gothic novel. English novelist, noted for Jane Eyre (1847), a strong narrative of a woman in conflict with her natural desires and social condition. The novel gave new truthfulness to Victorian fiction. ?? ?? ?? ?? Mary Ewumi 10M ...read more.