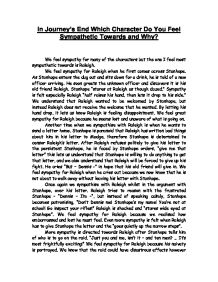 In Journey's End Which Character Do You Feel Sympathetic Towards and Why? We feel sympathy for many of the characters but the one I feel most sympathetic towards is Raleigh. We feel sympathy for Raleigh when he first comes across Stanhope. As Stanhope enters the dug out and sits down for a drink, he is told of a new officer arriving. He soon greets the unknown officer and discovers it is his old friend Raleigh. Stanhope "stares at Raleigh as though dazed." Sympathy is felt especially Raleigh "half raises his hand, then lets it drop to his side." We understand that Raleigh wanted to be welcomed by Stanhope, but instead Raleigh does not receive the welcome that he wanted. By letting his hand drop, it lets us know Raleigh is feeling disappointment. We feel great sympathy for Raleigh because he seems lost and unaware of what is going on. Another time when we sympathise with Raleigh is when he wants to send a letter home. ...read more.

Go inspect your rifles!" Raleigh is shocked and "stares wide eyed at Stanhope". We feel sympathy for Raleigh because we realised how embarrassed and lost he must feel. Even more sympathy is felt when Raleigh has to give Stanhope the letter and the "goes quietly up the narrow steps". More sympathy is directed towards Raleigh after Stanhope tells him of who is to go on the raid. "Just you and me, isn't it - and ten men? ... It's most frightfully exciting!" We feel sympathy for Raleigh because his naivety is portrayed. We know that the raid could have disastrous effects however Raleigh just thinks the raid is some sort of adventure, and therefore sympathy is created because of Raleigh's little experience of war. Raleigh receives more sympathy when he arrives back from the raid. We know that Osborne will not be returning due to his unfortunate death. Raleigh enters "slowly down the steps" letting us know that he is affected by Osborne's death. ...read more.

As the old friends quietly try to keep the moral high, Raleigh believes "something - hit [him] in the back - knocked [him] clean of - sort of - winded [him]" Truthfully, Stanhope and us know that Raleigh's spine is broke and he "can't move 'is legs." We sympathise with Raleigh because his shows how courageous he is, even if he's been hit badly. Raleigh tries to remain hopeful that his injury isn't serious, and 'tries to raise himself and gives a sudden cry "Oh - God! It does hurt!" We are sympathetic towards Raleigh because he now knows it's a serious injury. Tiny sounds "comes from where Raleigh is lying", we now are aware Raleigh isn't going to be alive for much longer. Raleigh's brave efforts in trying to stay awake and carrying on his duties in the war make us feel more sympathy towards him. Therefore we feel most sympathetic towards Raleigh because throughout the play, he has faced many situations which included bitter orders and na�ve excitement, but still he manages to remain courageous and strong until the very end. ?? ?? ?? ?? ...read more.