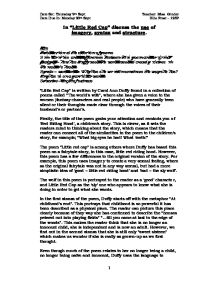 In &quot;Little Red Cap&quot; discuss the use ofimagery, syntax and structure.

In "Little Red Cap" discuss the use of imagery, syntax and structure. Plan: Introduction to the collection of poems Similarities and differences between this poem and original fairytale Imagery - how has Duffy used the words used to create pictures in the reader's head? Syntax - word order. Why has she written sentences the way she has? Emphasis on a particular word. Structure - length of stanzas "Little Red Cap" is written by Carol Ann Duffy found in a collection of poems called "The world's wife", where she has given a voice to the women (fantasy characters and real people) who have generally been silent or their thoughts made clear through the voices of their husband's or partner's. Firstly, the title of the poem grabs your attention and reminds you of 'Red Riding Hood', a children's story. This is clever, as it sets the readers mind to thinking about the story, which means that the reader can connect all of the similarities in the poem to the children's story, for example; "What big eyes he had! What teeth!" The poem "Little red cap" is among others where Duffy has based this poem on a fairytale story, in this case, little red riding hood. However, this poem has a few differences to the original version of the story. For example, this poem uses imagery to create a very sexual feeling, where as the original fairytale was not in any way sexual, but had a more simplistic idea of 'good - little red riding hood' and 'bad - the sly wolf'. ...read more.

For this reason we can see that little red cap also has a passion for learning, for it was the poetry that bought her to the wolf. The word poetry, was separated from the rest of this line in a sentence on it's own which is another way Duffy has used her words to draw attention to the more important things. For this reason, it is more unexpected for the reader to hear in the change of personality for the wolf's character. There is a lot of imagery throughout the poem to portray to the reader that little red cap has lost her innocence. Left it behind at the end of her childhood. "My stockings ripped to shreds, scraps of red from my blazer snagged on twig and branch". This powerful use of the colour red may symbolise the passion in this very sexual part of the poem, or perhaps even blood, because imagery has been used in such a dramatic way that the reader can see clearly she may even want to have sex with this wolf; "for what little girl doesn't dearly love a wolf?" This is almost chatty, written in the way someone would speak to a friend. For this reason, Duffy appears to have written to a more female orientated audience. Duffy uses more colour later in the poem "where a wall was crimson, gold, aglow with books", this imagery arguably does not mean that she has a passion for the colour or the wall in a physical sense, but reinforces the point that she has a passion for learning. ...read more.

This draws the readers attention to the last few lines which are very important in the poem, because everything that has been said previously is contradicted in these last few lines, for example the reader finds out that the wolf isn't as 'good' as he was portrayed, because he did in fact eat the grandmother. As well as this, we see that little red cap is no longer portrayed as innocent because she has had to use violence. The last stanza is also a reflection of her innocence "out of the forest I come with my flowers, singing all alone", this demonstrates an almost innocent approach which mirrors what was said in the beginning of the poem. This is a clear way to show Little red cap's growth and independence throughout the poem, although she still appears a little innocent. However, arguably once she has lost her innocence she cannot get this back. However by doing this she is showing that perhaps she no longer wants to be "at childhood's end" but back with the protection and security that she would have had when she was still an innocent child. In conclusion, Duffy has cleverly written this poem based on the fairytale little red riding hood, but there are many hidden meanings to various parts of the poem, for example touching on childhood innocence and teenage rebellion. There are also arguably different interpretations to what Duffy has written. Date Set: Thursday 9th Sept Teacher: Miss. Gruder Date Due In: Monday 20th Sept Ellie Frost - 12SP 1 ...read more.